No Country For Bold Men This article from the Spring 2020 edition of the IPA Review is written by IPA Research Fellow, Andrew Bushnell.

One of the striking features of the coronavirus recession is that, as IPA research has demonstrated, a chart of the economy now displays a ‘K’ shape. The K’s ascending line displays how bureaucrats and the bureaucracy-adjacent are doing fine, while the K’s descending line shows everyone else is suffering mightily. In this context, Michel Houellebecq’s novel from late last year, Serotonin—which I spoke about on the IPA’s Looking Forward 2019 Christmas special—takes on a somewhat different complexion from how it was received upon release. 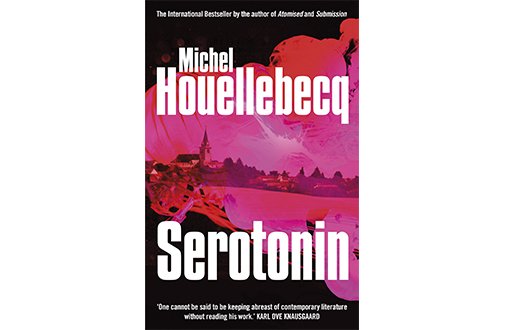 Houellebecq is France’s pre-eminent novelist. He has become famous for his acidic takes on modern life, dealing with classic French themes such as the loss of meaning that confronts the ostensibly free individual. He is probably most famous to English-speaking audiences for his 2015 novel, Submission, which was controversial for its depiction of a France in which the Muslim Brotherhood wins the presidency. The release of a Houellebecq novel is now a literary event, perhaps the last of its kind.

At the time of its release, Serotonin attracted headlines for capturing the concerns that animated the ‘yellow jackets’ movement (Mouvement des gilets jaunes) that roiled through France in 2019; especially the idea that France’s regions had been forgotten in the march of globalisation, which has overwhelmingly benefitted the cities. While this is indeed a theme in the book, by making his narrator a depressed and inert department hack Houellebecq aims the critique at a quite specific target: more than anyone else, it is the bureaucrats who have killed France. Serotonin is a story about a man and a country that have lost their vitality, and while they tell themselves this is because of uncontrollable circumstances, the horrible truth is that their own choices and flaws are to blame. The story is relayed to us in a conversational but affectless tone by Florent-Claude Labrouste, formerly an agricultural economist working in Government, and writing from a narrative present set some point in the near future. He is taking a new anti-depressant—hence the book title being the chemical the nervous system secretes to regulate mood—and waiting to die, alone in his apartment. While he waits, he recounts how he came to this fate.

But it is not just his fate, for Florent-Claude is as much an avatar for his country’s ruling class as the yuppie Wall Streeter Patrick Bateman is in Bret Easton Ellis’ American Psycho. Like Ellis, Houellebecq trades in obscenity and transgression in order to decry it—or rather, to mourn, in their own ways, the passage of their countries into a kind of post-morality that is itself obscene. Houellebecq does not push the schtick quite as far as Ellis (though he comes close), and the most confronting passages in this book almost seem to convey the message that a well-ordered society not only would not look like the one depicted (or documented, perhaps) by Houellebecq, it would also preclude the publication of such filth. That it does not is just as much a part of the author’s indictment as anything else.

The substance, then, of Houellebecq’s case against France is contained in his narrator’s life story, and basically it comes down to this: a stupid and pervasive hedonism gradually saps our will to live by drawing down on, and eventually exhausting, real value.

Bureaucracy is a country pretending to be a country.

The proximate cause of Florent-Claude’s depression is his regret for the failure of the two great love affairs of his life, and his manifest culpability in both cases. As a young man, Florent-Claude falls in love with a Danish girl, Kate, but he leaves her at a train station, unable to summon the will to stay with her. Looking back from his present state of ruin, Florent-Claude lapses into melodrama: “We could have saved the world… but we didn’t, or I didn’t, and love didn’t triumph… I betrayed love”. Later, he has a long-term relationship with a Frenchwoman named Camille that ends when she catches him with a black British girl that he has pursued more or less out of boredom with his happiness.

The symbolism is quite obvious, even schematic. In one case, the Frenchman retreats from his European love, and in the other, he destroys his love at home in France with an affair described in crassly exoticist terms, intelligible only as a comment on the eternal continental obsession with self and other, specifically the power of the latter to disrupt one’s sense of the former. In both cases, Florent-Claude is undone by his basest appetites and his lack of the character required to control them.

So it is in considering what kind of man would do these things that Florent-Claude becomes a true cipher for the message encoded in Houellebecq’s book, which really is, ultimately, about France. (I doubt Houellebecq would indulge in any quaint abstractions about universal human nature.)

It is here that Florent-Claude’s profession counts. He is one of Edmund Burke’s “sophisters, economists, and calculators”—the class of people charged with replacing the inherited order piece by piece with new rules and institutions of measurable utility. In Florent-Claude’s case, the task is, effectively, to oversee the dismantling of France’s traditional family farms so they can be integrated into the global economy.

This existence is morally degrading. As a bureaucrat, Florent-Claude is a high performer, though he does not agree with the policies he must implement. That is, he performs his function well, but inauthentically—his is an impression of a bureaucrat, as much an actor in bad faith as Jean-Paul Sartre’s famous waiter in Being and Nothingness. This is why Florent-Claude’s first positive action in the book is to run away from his life. Liberation, the desperate goal:

In France, abandoning your family is not a crime… It was startling that, in a country where individual liberties had tended to shrink, legislation was preserving this one, which was fundamental—in my eyes even more fundamental, and philosophically more troubling, than suicide.

In the course of a day, Florent-Claude resigns from his job, cancels his lease, and abandons his girlfriend. But this radicalism fails him in the end, and the books closes with Florent-Claude, now determined to kill himself, contemplating this question: “Did we yield to the illusion of individual freedom, of an open life, of infinite possibilities?” The whole bureaucracy is like this, of course. A tremendous act of bad faith; the bureaucracy is where a country is seen pretending to be a country. In its pretence, it undermines its own function. Naturally, then, it harms more than its own servants.

We are rapidly exhausting our inheritance.

Florent-Claude goes to visit an old friend of his, Aymeric, who is the scion of an old landholding family. Like Florent-Claude, who we learn early on inherited a substantial sum from his dead parents, Aymeric survives by selling off his family’s land to Chinese buyers and by trying to turn his dairy farm into a bed and breakfast. This last element makes for one of the book’s most shocking sequences, as Florent-Claude discovers a German tourist—symbol—in the act of committing a terrible crime, about which he does nothing, because he is French. As it turns out, Aymeric cannot save himself, and he bands together with some other local farmers to stage a protest that turns violent, and then fatal. This was the set piece that attracted the headlines and comparisons with the yellow jackets movement. But its role in the story is as a commentary on the consequences of feckless men like Florent-Claude, who despite his education and government position and ability to foresee what would happen to his friend Aymeric and the other farmers, could not stop it from happening, and did not even really try. In Houellebecq’s telling, France has renounced its freedom as a country, just as the fatally passive Florent-Claude renounced his own existence by faking a life as a bureaucrat.

All of this leads Florent-Claude to contemplate something more serious than the liberation of his authentic self, whatever that may be. He tracks down Camille and becomes convinced that an act of violence will bring her back to him. Pure ressentiment—blaming some objective feature of the world for one’s own dissatisfaction. But at the moment of decision, Florent-Claude finds he cannot go through with it. And that is that. From there he simply chooses to die slowly.

This central dilemma, if it can be called that, is what will stay with readers. The question Houellebecq asks is whether reaction—the undoing of the past—is possible, or whether it is a deranged fantasy. Notorious reactionary Carl Schmitt once observed that modernity means “they have put us out to pasture”. Similarly, Florent-Claude muses, “What an impulsive little creature the consumer is, more impulsive than cattle anyway”. For modern man, the choice is between violence and the pasture.

The answer Houellebecq provides is that this question is of no account because modern man lacks the will to try to change his fate anyway. Because what would such violent reaction be for? It is easy to glean in Florent-Claude’s story just what he is against: a modern world of mere convention, denominated in hedons and presided over by bureaucrats, with all longing for natural order—for something real—going unsated and even repressed. The story is littered with bitter and ironic references to God, safe in the conviction he is not there. As such, it is much harder to say what might ever motivate a man like Florent-Claude, and by extension a country like France, to really do anything but wait for the end.

This is a troubling conclusion, because the implication is that all that is holding back the violence is the remnant of morality that modern life is impelled to destroy. We are (or at least, the French are) rapidly exhausting our inheritance. Yet if we cannot go backwards, and we cannot escape, then we will have to find some reason to live. Whatever it may be, it probably will not be delivered by French novelists, and it definitely will not be delivered by government economists.