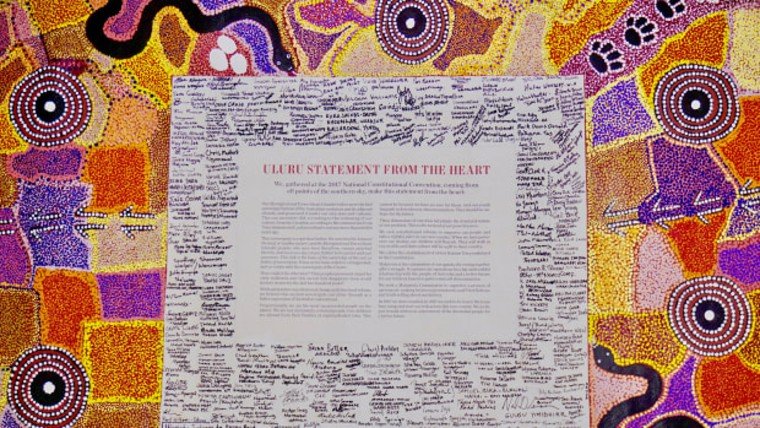 It’s understandable that some of Australia’s biggest companies including BHP, Rio Tinto, Lendlease, Qantas and Woolworths would support the Uluru Statement. Business leaders have a stake in the success of all Australians, just like everyone else does too.

The opinion of Rio Tinto’s CEO, who lives in Sydney, on how to overcome Indigenous disadvantage is important, but it’s no more or less important than that of a motor mechanic in Leonora or a primary school teacher in Burnie.

The hopes first of the 1967 Referendum half a century ago, then of the introduction of equal pay, then of land rights, and then of the Apology remain unfulfilled. Indigenous ‘recognition’ though the symbolism of a statement in the Australian Constitution was up until very recently assumed to be another stage in this process.

Now there is the Uluru Statement that seeks to enshrine in the Constitution a ‘First Nations Voice’ for Indigenous Australians to the Commonwealth Parliament, to create a government commission to supervise ‘agreement-making between governments and First Nations’ and encourage ‘truth-telling’ about Australia’s history.

The Uluru Statement is misconceived on the basis of principle and practice and is incompatible with Australia as a liberal democracy.

Race has no place in the Constitution. Martin Luther King Jr. didn’t stand on the steps at the Lincoln Memorial in Washington in August 1963 and say he wanted his children to be treated differently from white children. What he called for was ‘freedom and equality’.

It is unsustainable for business leaders to argue, as some have, that they’re simply supporting the aims of the Uluru Statement, and its practicalities can be determined at a later date. This is to ignore the fact that how something will be achieved is as important what is achieved. Even something as seemingly simple as who is an Indigenous Australian and who might be able to vote to choose ‘the Voice’ is highly problematic, to say the least.

In relation to Indigenous policy in this country, a number of business leaders are suffering from what Milton Friedman talked about in 1975 in a well-known interview.

“One of the great mistakes is to judge policies and programs by their intentions rather than their results. We all know a famous road that is paved with good intentions. The people who go around talking about their soft heart … I admire them for the softness of their heart, but unfortunately it very often extends to their head as well. [For example] the fact is that the programs that are labelled as being for the poor, for the needy, almost always have effects exactly the opposite of those which their well-intentioned sponsors intend them to have …”

So to begin with they should acknowledge that the creation of real property rights for Indigenous Australians that allow individuals to buy and sell land they own, and to borrow against it, will in many circumstances be more likely to create economic opportunity than does native title.

Then business leaders could go on and say that solutions to Indigenous disadvantage are more likely to be found through the drive and initiative of the private sector and the free market than from government.

Helen Hughes, who was one of Australia’s foremost thinkers about Indigenous policy and who worked for many years with the Centre for Independent Studies, once calculated that the federal government’s Remote Indigenous Housing Program was building houses at an average cost of $600,000, when the private sector was building the same-quality house for $300,000.

The legitimate desire of business leaders to do something and to be seen to do something about one of this country’s most fundamental challenges should not defeat the bedrock principle of Australia’s democracy, which is that every citizen is entitled to equal legal and political rights regardless of their race, ethnicity, or indigeneity. This is a principle that the Uluru Statement overturns.