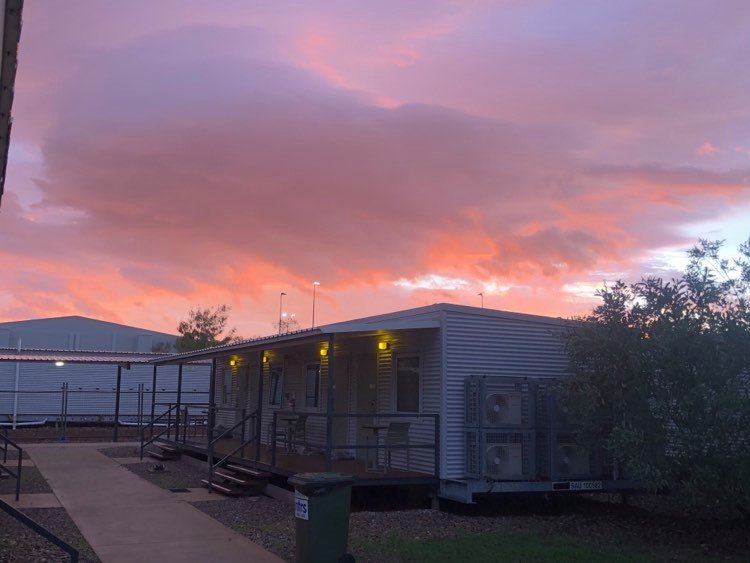 I am now halfway into my 14-day internment in the Howard Springs Quarantine Facility, located in the Top End, a mere 25km from Darwin. The complex, complete with pool, theatre, tavern, and tennis courts, was built by a Japanese energy company in 2012. After it completed the $55 billion gas plant on Darwin Harbour in 2018, it simply shut the gates, handed the keys to the NT government, and disappeared back to Japan with not so much as a sayonara. Since then, the compound has become a very costly millstone around the government’s neck. That is, until the arrival of Coronavirus and the ensuing border closures. Someone sitting at a desk in Darwin twigged that the mining camp could be reborn as a quarantine facility for displaced Australians. Fifteen minutes into the journey from Darwin Airport to Howard Springs aboard a rustic bus which brought back happy memories of school excursions, we received the following text message: ‘Dear Resident. Please be aware that there has been an increase of snake sightings. Take note of your surroundings.’ Since having arrived here, I have heeded this warning, taking great note of my surroundings at all times. Rather disappointingly, I am yet to sight a snake. I have however, sighted a number of skinks, a pair of biblically-proportioned grasshoppers getting up to no good on the hot footpath and a large, screeching owl, which just after dusk, swooped down the middle of the road on the other side of the fence. I am interned in the Orange Zone, cellblock L5 with my mother and two friends. We each have our own room with a single bed, air-conditioning which cuts through the 40-degree heat and bright orange cupboards in which to store our few possessions. The showers are extremely powerful, presumably designed to remove the grease from very dirty miners after a long day on the job.Police patrol the area a few times a day with a hello and a friendly wave. What a contrast to Victoria that is. The law here dictates that as long as you are on your veranda, you can be gloriously muzzle free. All other times require the wearing of mask, otherwise you are slapped with a whopping $5,000 fine. We are officially permitted 40 minutes of ‘yard’ time per day, but this is not altogether adhered to. If you complete a full circuit of the Orange Zone’s footpaths which loop around the cabins, you can cover a good 2kms.

Time ‘inside’ is turning out to be considerably easier than expected. Having spent the last nine months in Melbourne, I am used to a complete loss of freedom, mandatory mask wearing and oppressive police enforcement, neatly topped off with disproportionate fines. I suppose that this conditioning is one thing I can thank Dan Andrews for. Mealtimes are sometimes a highlight, but most often a lowlight. A furtive knock on the door, or sound of a large trolley rumbling by, indicates that our food has arrived, and we emerge from our rooms to snatch up the morning’s offerings. The same routine for lunch, which usually arrives while we are still recovering from the assaults of the breakfast baked beans, omelette, and sausage. Dinner is anybody’s guess, and we are becoming very adept at keeping edible lunch salads for when the kitchen staff have decided to resort to inedible meat loaf or grey slices of lamb for the evening meal.  We have been so very fortunate with our neighbours. On Day Two, we discovered that the cabins next to ours are inhabited by musicians Joe Camilleri and Claude Carranza. They are members of the Australian band The Black Sorrows and are on their way to tour New South Wales and South Australiaa. It took a while to coax them out of their rooms to practise on their veranda within earshot of others, but after a few nights, they came alive again after months of being isolated from each other. Soon, practice turned into a full show complete with banter for a highly appreciative, and in the truest sense of the word, captive audience. Their music filled the camp with joy. Gradually, the nightly concerts began to attract more and more residents of the Orange Zone, until one night, the set went on just a little bit too long and the crowd became just a little bit too big. The police shut the whole thing down. Joe told us afterwards that they had not really wanted to, but that they had a job to do. Such is life.

Unsurprisingly, most people here are refugees from Victoria. After swapping stories, I realised to my horror that we had only just made it out. At Tullamarine airport, the government had recruited a number of officious-looking women, given them hi-vis jackets, clipboards, pens and seemingly untrammelled power. They were waiting for us at airport security, doing their utmost to prevent anyone from leaving. Some passengers were given formal cautions but allowed through, trembling at the treatment they had received on the way. Others were unable to produce the correct documentation and were summarily sent back home. One or two made it onto the plane, only to be exposed as non-compliant, and were forcibly disembarked, along with their luggage. Thankfully we managed to talk our way through without having to show any paperwork.  We didn’t even know that it would be required. Everyone I have chatted with could not stand another minute of Dan Andrews’ dictatorship, the police state he has created and the economic and social devastation he has wrought on the place. The distrust and loathing are palpable. A great many families have packed up their belongings and are seeking a new life in other states. The atmosphere, however, is one of relief offset by cheerfulness and optimism because we are once again masters of our own destiny. Everyone has decided to take back control of their lives from unelected bureaucrats, ‘experts’ and government overreach. Many say that they will only return once Andrews is no longer in power because they have no faith that he will not hesitate to lock them up again as soon as there is a resurgence of the virus. It will be very interesting to see the migration statistics when they are released in December. I suspect that this is just the beginning of the exodus from Victoria.