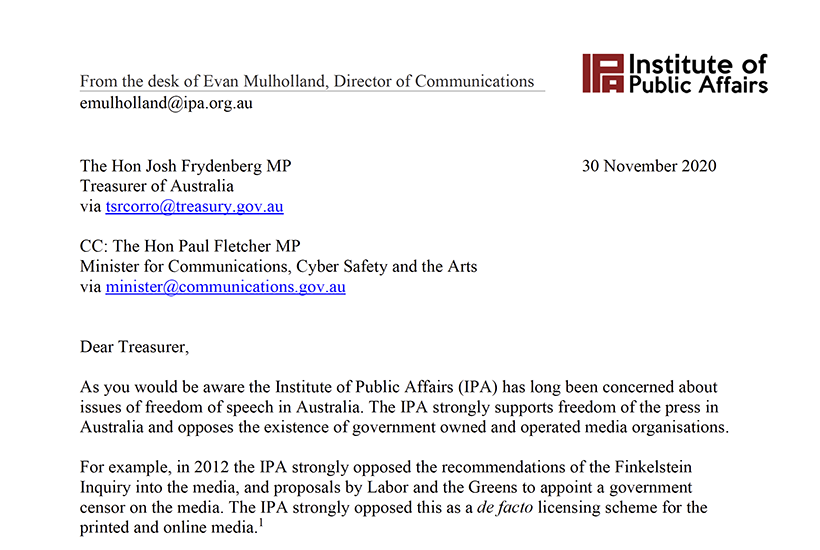 As you would be aware the Institute of Public Affairs (IPA) has long been concerned about issues of freedom of speech in Australia. The IPA strongly supports freedom of the press in Australia and opposes the existence of government owned and operated media organisations. For example, in 2012 the IPA strongly opposed the recommendations of the Finkelstein Inquiry into the media, and proposals by Labor and the Greens to appoint a government censor on the media. The IPA strongly opposed this as a de facto licensing scheme for the printed and online media. You might be aware of the IPA’s position on the Australian Broadcasting Corporation (ABC), that its existence as a government owned and operated broadcaster is incompatible with a free society. It is within this context that the IPA has undertaken analysis of the reported policy proposal to include the ABC in the draft news media and digital platforms mandatory bargaining code.

The IPA’s conclusion is that the ABC should not receive additional funds as to do so would further distort diversity in the media. The ABC does not represent a range of perspectives. The ABC is increasingly out of touch with mainstream Australians.

The ABC’s funding is guaranteed by government through taxpayers; therefore, it is not affected by loss in advertising revenue that affects the commercial broadcasters.

It is concerning that a Coalition government is considering a new financial windfall for the ABC on top of its annual $1.2 billion in public funding…