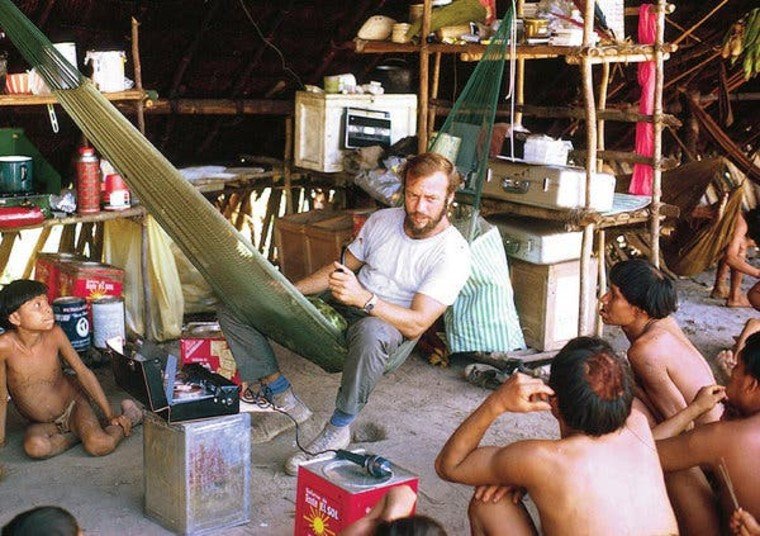 Anthropologist Napoleon Chagnon, who died this week aged 81, was in the last generation of that profession who could claim to have studied an indigenous culture more or less unsullied by contact with modernity. And he was among the first of his generation to experience personal attacks from the ascendant cultural left in full flight; subject to deplatforming, character assassination, professional ostracism and all the other tools by which conformity to the canons of identity politics is enforced. I marked Chagnon’s passing on this week’s Looking Forward Podcast, because his life and times are a study in miniature of the destruction of an academic discipline by identity politics.

An American, Chagnon graduated in Anthropology from University of Michigan and went and lived amongst the Yanomamö Indians who live the region which stretches across Brazil and Venezuela, and he produced books of field research on them. He famously labelled them ‘the fierce people.’

His field research started in the 1960s when anthropology in the popular imagination and in the Universities was dominated by Margaret Mead and a sort of noble savage view of what native peoples are like. There is of course a classic contrast in views of life among native peoples; you can either take the Rousseauian view of the noble savage or the Hobbesian view that life prior to the imposition of sovereign authority is poor, nasty, brutish and short. Mead became famous with the publication of Coming of Age in Samoa (1928), which famously portrayed a native people living in harmony and being unfussed about premarital relations or even post marital relations.

This was somewhat what Changon expected to find. Instead he found a culture among the Yanomamö that was strong and impressive in its own way, but which was unmistakably violent, with lots of raids against competing groups, and he noted that much of the violence was over women. Adultery was not indulged and could lead to fatal outcomes. Thus were the battlelines drawn – Mead’s book was said to be the most widely read book in the field, until it was overtaken by Chagnon’s Yanomamö: The Fierce People (1967).

Having observed this behaviour, Chagnon developed an explanation that ultimately fed into the emerging fields of sociobiology and evolutionary psychology. The idea essentially is that human behaviour can be explained a lot by reference to the desire to maintain bloodlines whether consciously or otherwise, trying to preserve our genetic material. So you would go to war with those in your kin groups against those who were not in your kin groups, which is what Chagnon observed. And this is what drives small pre-political societies.

It was this, in the 1970s that led to Chagnon being targeted by the cultural left, as were other ‘controversial’ figures such as the founder of sociobiology, E O Wilson. This narrative of traditional cultures being violent, and pursuing the narrow interest of their genetically defined in-group, conflicted with the new movement’s determination to show that all social pathologies found in native peoples could be attributed to colonialism, exploitation and the general corruption brought to them by the West. Anthropology was being transformed from a social science based on empiricism and hypothesis testing, to a cultural movement based on identifying with the oppressed and documenting the wrongs of the oppressor.

The ferocity of the attacks on Chagnon was such that he titled his 2012 account of his life and work and battles Noble Savages: My Life Among Two Dangerous Tribes – The Yanomamö and the Anthropologists. Chagnon in that book made no bones about tracing the Marxist inspiration for cultural anthropology as now found in Universities. It is worth noting Mead herself wanted to resolve issues through debate within the bounds of the academic discipline, but the new left had no interest in that. The validity of Chagnon’s work continues to be recognised by figures such as Stephen Pinker and Matt Ridley, who draw upon evolutionary psychology in their explanation for social behaviour. Pinker makes the argument that levels of violence can be attributed to the absence of institutions that can bring peace – this is the classic Hobbesian argument of The Better Angels of Our Nature. The Yanomamö are not inherently better or worse morally than, say, the average Australian, they are just responding to the incentives they and the institutions within they live. As institutions improve, violence decreases.

In Australia we had a bizarre echo of the Rousseau v. Hobbes smackdown when a Channel 7 documentary aired in 2011 portrayed a Brazilian tribe who live in the Amazon as violent and superstitious, along with claims of infanticide. Survival International, a trans-national group which claims to act on behalf of tribal people, lodged a complaint with the Australian Communications and Media Authority alleging the report was inaccurate and racist. ACMA was duly “satisfied that given the highly evocative language used in the report to describe the killing of babies and the judgmental tone used (in) condemning the alleged practice, it is likely that in all the circumstances these contributory factors would have perpetuated and provoked an intense dislike and contempt for the Suruwaha.” Channel Seven’s subsequent appeal to the Federal Court was unsuccessful.

Given that ACMA has explicit powers to restrict free speech in broadcasting (and it is not clear whether truth was actually a defence for Channel 7), the issue is much more general than the legal grounds on which such decisions run. The question is more whether, 50 plus years after Chagnon started documenting life among the Yanomamö, it would be possible for any anthropologist or other social scientist to put forward any descriptions of tribal life that are less than laudatory without facing (a) professional ostracism and (b) sanctions by state agencies empowered to police speech against the various sins of identity politics.

Something to reflect upon as Napoleon Chagnon goes to his rest.