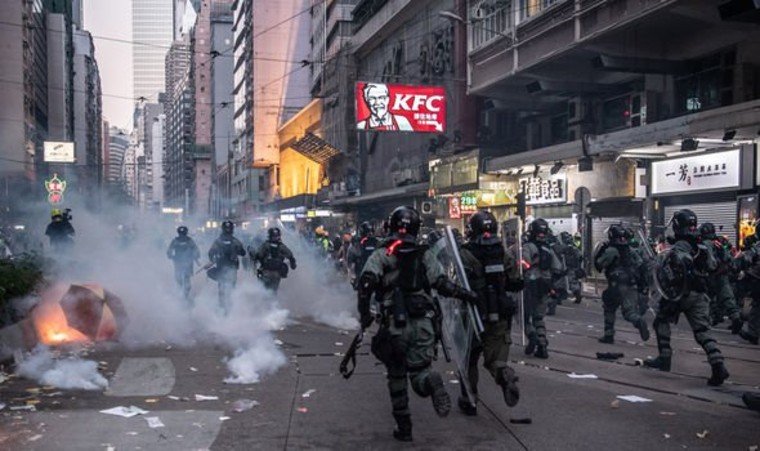 We can be thankful to the Hong Kong protesters for highlighting the moral conflict at the heart of the rivalry between Red China and the West. While an important aspect of the power struggle is one of economics and geo-political power, which has been the focus of much of the commentary, only recently has the West awoken to the contest of values that divide us and China. It is a contest about the core values which define our civilisation. In the West, it is the values of individual liberties, the rule of law and the ideas underpinning liberal democracy. In China, it is the resilient ideas of Mao, a governing ideology which combined one-party autocracy, militarism and the censorship and control of all levels of society. Through a vast network of influence, the Chinese government is exporting its brand of communism around the world. It has met a level of compliance that the Soviet Union could only have dreamed of.

The struggle for the people of Hong Kong to retain their freedoms has exposed this compliance. Naturally the people of Hong Kong have been much more aware of the precarious state of their freedoms. After decades of repressing, starving, and murdering its own people, the People’s Republic of China was inexplicably gifted the crown colony of Hong Kong in 1997 on the mere hope that mainland governance would improve. The given basis for this transfer was the expiry of a ‘lease’ signed in 1898 between the British Empire and the Qing dynasty, a document to which the Chinese communist party was not a signatory and whose claim should not have been recognised. It is a sad note in modern history that in the same decade the West prevailed over the communist bear, it immediately made territorial concessions to the communist dragon.

The terms of the handover provided that Hong Kong would be governed under a ‘one-country, two-systems’ model, meaning the territory would be incorporated as a territory of mainland China but would retain many aspects of its pre-existing legal and political system, underpinned by the British common law, the rule of law and individual freedoms. However, the ‘one-country, two-systems’ model is due to expire in 2047, and the communist party’s attitude to its ‘autonomous’ territories such as Hong Kong and Macau, as well as its ambitions towards Taiwan, is to see their full integration into the mainland’s economic and political systems. In other words, it will no longer be ‘one-country two-systems’, but ‘one-country, red-system’.

The present conflict between the people of Hong Kong and the Chinese authorities erupted in June when one million Hong Kong residents took to the streets in opposition to a proposed extradition treaty between the two systems. The treaty, which was ultimately withdrawn in September, would have meant that Hong Kongers could be extradited for trial on mainland China where the rule of law is not practised, legal rights are not protected and the conviction rate is 99.9 per cent. The proposed law gave a glimpse into what Hong Kong post-2047 might look like, and the protests continue as a cause for democracy.

The Chinese communist party has been sensitive to any public remarks made in sympathy to the Hong Kong protesters and have used their influence to shut those comments down. Earlier this month, Daryl Morey, the general manager of National Basketball Association team the Houston Rockets posted an image on Twitter saying ‘Fight for Freedom. Stand with Hong Kong’. As sponsors and broadcast partners begun to cut ties with the Rockets and the competition as a whole, the Rockets disowned Morey’s comment and Morey himself apologised and deleted the tweet. The NBA released an official statement, where it acknowledged Morey’s post ‘deeply offended many of our friends and fans in China, which is regrettable.’ In a statement for Chinese audiences, the NBA went further, saying it was ‘extremely disappointed’ by the ‘inappropriate’ comment which ‘severely hurt the feelings of Chinese fans.’ It is standard now to equate the interests of the Chinese communist party with the feelings and sentiments of the Chinese population as a whole.

Also this month, American video game developer and publisher Blizzard has come under fire for how it has responded to a professional game player expressing his support for Hong Kong protesters. During an official Blizzard interview, a victorious competitor and Hong Kong-based professional gamer ‘blitzchung’ wore a face mask in reference to the government-issued ban on wearing masks while protesting, and also shouted ‘Liberate Hong Kong, revolution of our age!’ Blizzard brought the hammer down on blitzchung, relying on discretionary competition rules to take away his victory and prize money and to ban him from competition for a year. Like the NBA, Blizzard released an official statement to Chinese social media expressing its ‘strong indignation’ of blitzchung’s actions and concluded that the ‘players involved will be banned, and the commentators involved will be immediately terminated from any official business. Also, we will protect our national dignity.’

The commonality of the response by NBA, Blizzard and their sponsors and partners is emblematic of the swiftness of Western corporations to self-censor to appease the thin-skin sensitivities of Chinese communists. In effect, corporations that are based in the West and which arose from the opportunities presented by Western economic systems, have become vessels for the dissemination and enforcement of China’s values around the globe which are ultimately anti-Western. As Scott Morrison pointed out in a speech to the Lowy Institute earlier this month, this is an era of strategic competition between China and the West. In fact, it is the clash of civilisations defined by our attitudes to freedom and human dignity over oppressive totalitarianism. And it is a battle we are currently fighting with one hand tied behind our backs.