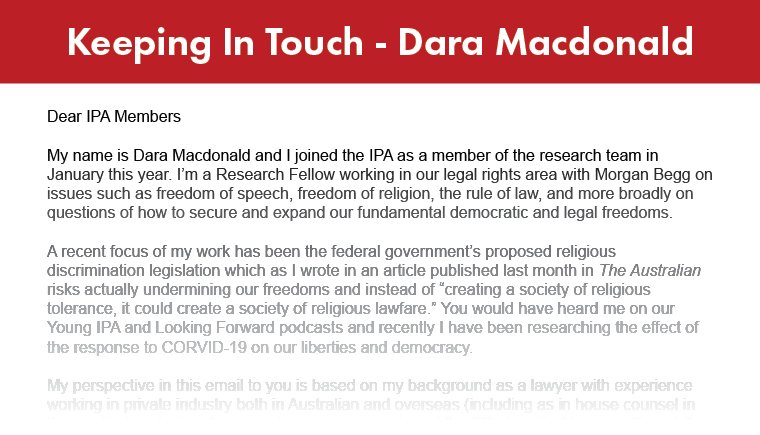 My name is Dara Macdonald and I joined the IPA as a member of the research team in January this year. I’m a Research Fellow working in our legal rights area with Morgan Begg on issues such as freedom of speech, freedom of religion, the rule of law, and more broadly on questions of how to secure and expand our fundamental democratic and legal freedoms.

A recent focus of my work has been the federal government’s proposed religious discrimination legislation which as I wrote in an article published last month in The Australian risks actually undermining our freedoms and instead of “creating a society of religious tolerance, it could create a society of religious lawfare.” You would have heard me on our Young IPA and Looking Forward podcasts and recently I have been researching the effect of the response to CORVID-19 on our liberties and democracy.

My perspective in this email to you is based on my background as a lawyer with experience working in private industry both in Australian and overseas (including as in house counsel in the medical sector) and now working as a researcher at the IPA. I applied for a position at the IPA because I believe deeply in the importance of freedom as a basic requirement to human flourishing. Growing up in a town called Alstonville in a part of New South Wales often referred to as the ‘rainbow region’ might be a surprising origin story, but was instrumental in enabling me to think freely.

Australia right now like the rest of the world is fighting a battle on two fronts. We are trying to stop the spread of a dangerous virus and we’re trying to ensure that we mitigate the effects on society and the community of that fight. But I don’t believe that democracy and the accountability of the government to the people should be a fatality of the coronavirus.

Many states, in particular New South Wales and Victoria, have restricted activities such as walking the dog, reading a book, or getting some sun, all activities which do not constitute a “reasonable excuse” to leave the house, but which can be conducted whilst keeping an appropriate social distance. This is an impingement on civil liberties above and beyond what is required to ensure that people are socially distancing. Making people justify being outside, even when they are alone, is extreme. There is no risk being averted by restricting people’s movement to this extent that could not be prevented by observing them and their adherence to social distancing orders.

These restrictions are more than just disproportionate, they also don’t adhere to principles of due process. They reverse the burden of proof. People are not presumed to have left their house legally, but have to be ready to prove they have a lawful excuse to be outside.

Our legal system is designed in accordance with the idea that it is so egregious to deprive one innocent man of their liberty that it is better that 10 guilty men are acquitted. There is a presumption that the state has resources and knowledge at their disposal that the individual does not. It is incumbent on the accuser to prove the guilt of the accused as opposed to them having to prove their innocence.

The enforcement methods used by police at the moment exemplifies the inequity between individuals and law enforcement and further illustrates the importance of due process. Some examples of policing that are particularly invasive include:

At the same time as emergency powers are being wielded our parliamentary democracy based on representation, debate, and transparency is being suspended.

It is of paramount importance that the parliament remains open and functioning.

The seizure of emergency powers asks something very significant of Australians. It asks us to place an enormous amount of trust in our institutions. However, at the same time as our institutions are being empowered, the norms, such as due process and democracy, which enable our confidence are being discarded.

Trust in institutions must be earned, but the institutions we are asked to place our trust in are the same ones that have been riddled with scandal and deserve our suspicion.

We are asked to trust that the Victorian Police will show discretion when empowered to hand out fines for petty infractions. Yet this same organisation is the one that has recently seemed to have no concern for the basic principles of justice as exemplified in the Lawyer X debacle and the recent collapse of the case against Cardinal George Pell in a 7-0 High Court judgment. Likewise the NSW Police that were hurled before the Law Enforcement Conduct Commission for the strip-search of minors have in response to the current health crisis been granted discretionary powers to hand out fines of up to $11,000 for anyone not complying with the lockdown restrictions.

With our institutions so eroded the amount of trust that people are willing to give our institutions has been surprising. It is a wonder that the removal of our civil liberties and democracy hasn’t been met with more uproar. This is likely a product of enormous goodwill that has been built up through many years of a functioning liberal democracy. For Australians authoritarianism and tyranny is so outside the realm of experience that we trust that our government has our best interests at heart. However, those in power must be reminded that this trust in our government and institutions is neither limitless or indefinite, and senseless overreach and prolonged uncertainty will wear out the public’s confidence.

The hounding of people who dissent to take every government edict as gospel, like Peter Hitchens or Lord Sumption in the UK, or my colleague Gideon Rozner for a video suggesting that this lockdown should begin to be ended, is akin to a kind of heresy worthy of being burned at the Twitter stake is telling. It suggests that maybe people don’t want to know how the sausage is made at the moment. They don’t want to hear debates or contemplate that there might be trade-offs or need for political judgments because that implies that the models we are all relying on to determine policy are not prophecy.

Jonathan Sumption is a former judge of the UK Supreme Court and what he said on the BBC a few weeks ago continues to echo:

The real problem is that when human societies lose their freedom, it’s not usually because tyrants have taken it away. It’s usually because people willingly surrender their freedom in return for protection against some external threat. And the threat is usually a real threat but usually exaggerated. That’s what I fear we are seeing now. The pressure on politicians has come from the public. They want action. They don’t pause to ask whether the action will work. They don’t ask themselves whether the cost will be worth paying. They want action anyway.

Perhaps it is not just Orwell that has come to life in the form of incursions on civil liberties, but also Aldous Huxley. Technology has facilitated the enforcement of lockdown, but also made it tolerable. Our wish is our command. Everything from entertainment to food can be ours with a click of a button without having to leave the lounge. As our interactions have moved online we have become more and more physically isolated for years making the final leap to complete isolation barely noticeable.

I thank you for your support of the IPA and I am incredibly grateful for the opportunity to not just think of myself during these times but of what is important for the nation.

It is your generous support of the IPA that will ensure that there are always people that can fight for our liberty.

If you've enjoyed reading this article from the Institute of Public Affairs, please consider supporting us by becoming a member or making a donation. It is with your support that we are securing freedom for the future.
JOIN DONATE
Tags:coronavirus keeping in touch legal rights
Share: