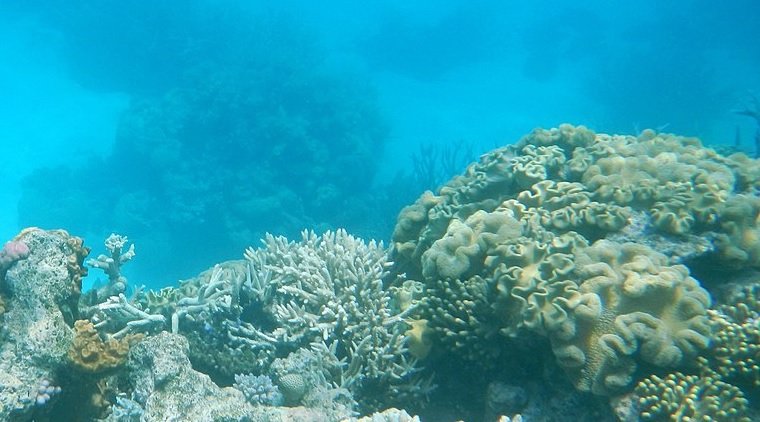 The following is an excerpt from chapter 2 in Climate Change: The Facts 2017, published by the IPA in 2017. A PDF of the full chapter is available here, and the book can be purchased here.

There has been an exponential increase in research on the topic of ocean acidification, which broadly concerns chemical changes in the ocean in response to increased concentrations of atmospheric carbon dioxide (CO2). Uptake of CO2 by the oceans from the atmosphere can poten­tially alter the balance of inorganic chemicals present, in turn affecting biological processes – including photosynthesis and calcification rates at coral reefs (Gattuso & Hansson 2011; Raisman & Murphy 2013). Coral reefs are a major focus of ocean acidification research. There is concern that increased atmospheric CO2 will significantly reduce calcification and so negatively impact the overall health of these iconic ecosystems – held together by calcium carbonate that is secreted by corals. In this chapter, we provide some background into the physical and chemical processes associated with ocean acidification, before consid­ering the research into the effects of ocean acidification on biological organisms, with a particular focus on Australia’s Great Barrier Reef. CO2 occurs naturally in the Earth’s atmosphere in very low concen­trations, presently at about 400 ppm (parts per million). Accurate measurements of atmospheric CO2 concentration have been carried out at an observatory in Hawaii since 1959, when the concentration was 312 ppm. Pre-industrial levels are estimated to be about 280 ppm.

There is a natural exchange of gases between the atmosphere and dissolution in the ocean, with flows in both directions. CO2 dissolves in water with its solubility depending on the temperature: the lower

the water temperature, the higher the solubility of a gas such as CO2. An equilibrium may eventually be established when the flows in each direction are in balance. In turn, the strength of the flow in each direc­tion is directly proportional to the concentration. If the concentration of atmospheric CO2 increases, this increases the rate of CO2 flow into the ocean, and eventually a new equilibrium establishes.

After dissolving in the uppermost layer of the ocean, CO2 generates a number of changes to the chemical composition of the seawater. The chemistry of inorganic carbon in seawater is relatively complex, and can be understood in terms of a set of inter-related equilibrium processes. Dissolved inorganic carbon is mainly present in three chemical forms:

There is also a minor amount present as carbonic acid (H2CO3).

So, carbon entering the ocean as CO2 can be transformed into these other inorganic ions and molecules. When these reactions occur, hydrogen ions (H+) are liberated into the seawater, and this in turn affects the pH of the seawater (pH is a measurement of the acidity of an aqueous solution, defined as the negative logarithm of the hydrogen ion concentration in the solution).

The term ‘ocean acidification’ refers to the decrease in pH that occurs when the concentration of CO2 in the atmosphere increases through a chain of reactions that can cause the ocean pH to drop. A neutral solution (neither acidic nor alkaline) has a pH of 7.0. Acidic solutions have a pH less than 7.0, while alkaline solutions have a pH greater than 7.0. Typically, present-day seawater varies widely in its pH, but generally it is alkaline, having an average pH in the range of 8.2 to 8.4.

Ocean acidification does not imply a scenario where the oceans become acidic (that is, the pH of the ocean falls below 7.0). The whole process could also be referred to, in perhaps less emotive terms, as ‘neutralisa­tion’, or alternatively ‘carbonation’ (Gattuso & Hansson 2011) because there is an increase in the concentration of dissolved inorganic carbon.

Some concerns relate to the possibility of the saturation state decreas­ing as the pH falls. The key issue is, that as the concentration of carbonate ions declines, thereby reducing the value of Ω, it will affect the ability of organisms to undertake calcification, which could potentially have a very detrimental impact on shells and coral reefs.

Different processes, operating on very different timescales, become important in determining the fate of CO2 in the atmosphere. Once released, it takes about a year for CO2 to mix throughout the atmosphere. The ocean consists, broadly, of three layers: the uppermost, or boundary layer; the mixed layer, affected by waves and turbulence caused from wind stress on the sea surface; and the deep-ocean layer. The very uppermost boundary layer of the ocean almost instantaneously equil­ibrates with the overlying atmosphere. Below that, is the mixed layer, which then absorbs the CO2 through the action of wind, waves and resulting turbulence. Once in the mixed layer, CO2 can be transported to the deep ocean, through processes that occur on millennial timescales…

For the rest of the text refer to the PDF of the chapter, here.
Image credit: Agincourt Reef, GBR, Robert Linsdell, Wikimedia Commons