The treatment meted out to Kimberley Kitching by some of her Labor “colleagues” was on any definition bullying, nasty and completely unfair. But that’s politics – politics, like life, is unfair.

But certainly, what happened to Kitching 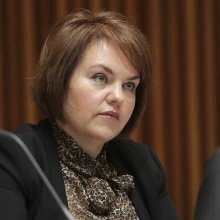 Kimberley Kitching at a Senate estimates hearing in 2019. Alex Ellinghausen

was particularly vicious and the labelling of some of the perpetrators of what was done to her as “mean girls” is on the more polite end of the spectrum of how they could be described.

The issue is not so much the bullying of Kitching or the double standard of Anthony Albanese and Labor’s leadership group, who pretend to speak passionately about the importance of respect in the workplace and in parliament while, at best, turning a blind eye and, at worst, sanctioning the ostracism and emotional abuse of someone they worked with. “The standard you walk past is the standard you accept” is more talked about than practised.

The issue is not that Kitching was bullied – which she was.

What’s more significant is why it happened and the truth is that Kitching was cancelled by Labor’s leadership and removed from roles of any influence and responsibility because – as former federal ALP MP, Michael Danby has said – she stood for an “era of Labor which was no longer dominant in the party”.

“The left wing for the Labor Party is too strong and the reason she was difficult was because she represented the mainstream, the Bob Hawke, Paul Keating, Kim Beazley point of view which is now not in the ascendancy in Labor.”

Kitching was a victim of the cancel culture of the left. The modern left might embrace the diversity of identity politics but not diversity of opinion. And it should be remembered the perspectives Kitching expressed were until quite recently in the middle of the mainstream of Labor Party thinking. What happened to Kitching is what Labor now does to its own.

In 2019, during the federal election campaign, Labor senator Penny Wong pointedly refused to shake hands with Coalition senator Simon Birmingham after an election debate between the two. At the time it was seen as fleeting lapse of judgment. It may have been. Or it might have been an insight into the mindset of the person who could be the Australian minister for foreign affairs if Labor wins government in May.

Opposition Leader Anthony Albanese says that if he becomes prime minister he will seek to govern in the mould of Bob Hawke. Maybe. But it might be consensus by eliminating dissent rather than accommodating difference.

The clue to trying to understand a possible Albanese government is not by going back nearly four decades in history to the election of Hawke. It’s to be found by looking at state Labor governments today. That is where the staff and the public servants of a future Albanese government will come from.

In Victoria, Daniel Andrews doesn’t even pretend to hide his contempt for anyone who disagrees with him. In the same way that Victoria is becoming a one-party state (if it isn’t already), the Victorian ALP is becoming a one-faction party as Andrews and his allies purge from parliament any Labor MP they can’t control.

In Queensland in a few years, politics, and in particular Labor politics, will not look very different from what it is in Victoria. At this stage, the McGowan government in Western Australia is different.

By background and inclination, Albanese more closely approximates Andrews and Palaszczuk than he does McGowan (and Peter Malinauskas, if he becomes South Australian premier at the weekend).

Whether there’s still a place in politics (on either side) for people such as Kimberley Kitching is a good question. Michael Danby remarked that too many people “were envious of [Kitching’s] cosmopolitanism, her charm, and [her] national support across the aisles”. He could have added that too many people were also envious of Kitching’s character.