Time For a Tax Revolution 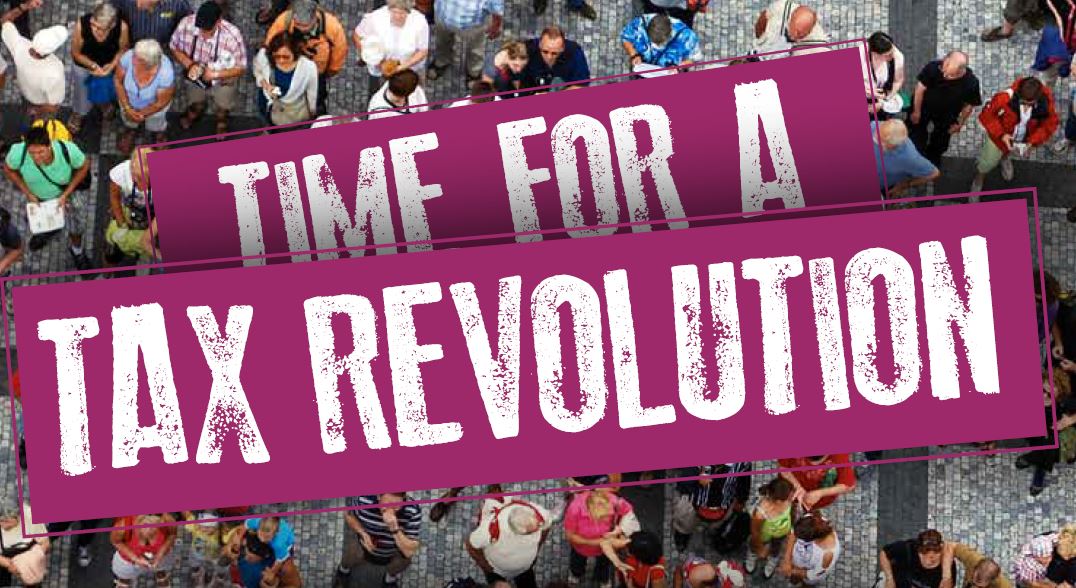 This article first appeared in the May 2018 IPA Review. PDF version is here.

With its push for corporate tax reforms, the Federal government is billing 2018 to be the year of the tax cut, but Australia’s tax system is so archaic, inefficient, and destructive of wealth creation that only root and branch reform can deliver a much needed boost to investment, jobs, and growth.

This year the Commonwealth, state, and local governments will confiscate some $540 billion from Australia’s collective back pocket, or around 30 per cent of GDP. Yet runaway spending means budget deficits and debt will continue to climb. The Commonwealth budget will remain in deficit at least until 2020-21 when the government is forecasting the first return to surplus since the Rudd spending spree of 2008. But this is based on highly optimistic assumptions about economic and wages growth.

Besides, even the government’s own figures show growth in gross government debt won’t be tapering off. Debt currently sits at $534 billion and is projected to reach $684 billion by 2027-28. It is worth remembering that debt is tax by another name. All debt must be paid back with future taxes—either through faster economic growth which grows the tax base and provides more revenue to the Treasury’s coffers, or, more likely, through higher tax rates and more taxes.

This means today’s young Australians face paying nearly a quarter of a trillion dollars in extra tax to pay for today’s irresponsible, big government largesse. The rapid accumulation of debt could be excused if Australians were getting something of value in return. But what have we got? A $90 billion National Broadband Network that is worse than what we had before, $60 billion in subsidies to renewable energy that can’t keep the lights on, $89 billion on submarines beset by cost blow-outs and inefficiencies, and $55 billion spent on schools only to see results decline and un- Australian values taught.

It is in this context that the government developed its ‘enterprise tax plan’ in 2016. The centrepiece of the government’s tax plan is to reduce Australia’s high corporate tax rate from 30 to 25 per cent by 2026- 27. So far, the Senate has only passed a fraction of these proposed cuts. Businesses with an annual turnover of $25 million or less now face a rate of 27.5 per cent. From 2018- 19 the threshold then rises to $50 million—meaning more businesses will receive the tax cut—and the rate cascades down to 25 per cent by 2026-27.

TO DATE, MORE THAN 300 BUSINESSES IN THE UNITED STATES HAVE PROVIDED STAFF WITH BONUSES, PAY RISES, AND OTHER BENEFITS AS A DIRECT RESULT OF CUTS IN THEIR CORPORATE TAX RATE.

However, larger businesses still face the 30 per cent rate. And, as of writing, it is highly unlikely the Senate will extend tax cuts to larger businesses, meaning such businesses will still face tax rate amongst the highest in the developed world. In stark contrast, the US recently reduced its rate from 35 per cent to 21 per cent. The rate in the United Kingdom is set to drop to 17 per cent by 2020. And the rate in Singapore already sits at 17 per cent.

So even under the best case scenario – that is, the corporate rate dropped to 25 per cent for all businesses – Australia would remain a highly unattractive investment destination. It is clear that tinkering around the edges of our broken tax system won’t be enough. Instead, it is time for Australia to embark on bold tax reform.

WHY WE NEED BOLD TAX REFORM

There are many problems with the structure of Australia’s corporate tax rate schedule. The application of a higher tax rate for businesses with high turnover creates a disincentive for businesses to grow. We should expect to see a clumping of businesses with a turnover of just below the $50 million mark. This is bad for job creation and penalises successful businesses.

Indeed, the positive effects of cutting the business tax are clear. Lower taxes will increase investment in Australia. This will increase the demand for workers which will increase both job creation and wages. According to recent analysis by the Treasury, around two-thirds of the benefit of a business tax cut goes to households, mostly as higher real wages.

This isn’t just theory. To date more than 300 businesses in the United States have provided staff with bonuses, pay rises, and other benefits as a direct result of the Trump administration cutting the United States’ corporate tax rate to 21 per cent from 35 per cent. AT&T, the world’s largest telecommunications company, paid a $1,000 bonus to 200,000 workers. Boeing invested an additional $300 million on employee related and charitable activities. Walmart, the world’s largest company, announced it would also spend $300 million on wage increases, including bonuses of up to $1,000 per employee.

However, with further business tax cuts likely off the agenda, the Turnbull government is turning to income tax cuts in the lead up to the 2018-19 budget. Income tax cuts would be welcome. Many families are struggling with the rising cost of living associated with stagnant wages growth and the rising cost of household essentials, such as education, child care, and health care.

But the same problems that beset the Government’s proposed corporate tax cuts will occur with income tax cuts. The Senate will not agree to cutting the top marginal income tax rate or increasing the threshold at which the top rate kicks in. This means Australia will likely maintain its obscenely high top marginal tax rate of 47 per cent, which is amongst the highest in the OECD. Australia’s top rate also kicks in at a low level—just $180,000, which is 2.2 times the median income. The OECD average is 5.3.

But there is another problem with reducing the tax burden on middle earners but not high earners. It will increase the so-called progressivity of the income tax schedule. A tax system is defined as progressive when marginal tax rates increase as earned income increases, meaning a larger share of income is confiscated by the government the more one earns. However, those who claim that progressive tax systems are fairer than flat-tax schedules ignore the all-important point: today’s low income earners are tomorrow’s high income earners. Progressive income tax schedules discourage upward economic mobility as an increasing share of income is confiscated the more successful people become.

Secondly, the corporate tax rate should be cut for all businesses, ideally to zero. All taxes destroy wealth creation. But studies from bodies ranging from the Treasury to the IMF demonstrate the corporate tax is one of the most destructive taxes on the books, because businesses are highly mobile.

Thirdly, the GST system should be reformed. As Morgan Begg explains in these pages, the current GST distribution system creates disincentives for state governments to engage in pro-growth economic reforms. To fix this state government should be able to set their own GST rate, and keep whatever revenue they raise from the GST. This would ensure that state governments which impose bad policy which shrinks their growth prospects, and shrinks their revenue base, would incur the attendant costs. RETURNING TO THE BUDGET

One could suggest that tax reform along these lines would blow the budget out in the absence of spending cuts. And, indeed, government spending must be reduced—both to get the budget under control, but more importantly to the reduce the amount of government meddling and interference in our lives.

However, such tax reform can be designed to both maintain revenue neutrality and reduce the overall tax burden on workers, families, and businesses. The government could switch from highly inefficient taxes, such as the corporate tax and progressive income tax, toward less inefficient taxes, such as flat income taxes and properly administered GST. Such a switch would reduce the negative incentives for business investment and work effort, as base means a given amount of revenue can be attained through lower rates.

SMALL CHANGES AROUND THE EDGES OF THE CURRENT SYSTEM WILL NOT BE ENOUGH TO AVERT THE COMING TAX AND DEBT CRISES.

Reforming Australia’s archaic, inefficient, and job-destroying tax system is an absolute must-do for the Turnbull government. Small changes around the edges of the current system will not be enough to avert the coming tax and debt crises being passed on to the next generation of Australians.

POSTSCRIPT: WHAT WE SHOULD LEARN FROM U.S. TAX CUTS

409 companies announced pay rises, bonuses, and other employee benefits as a direct result of the tax cuts in the U.S.

Business investment, and business and consumer confidence, have increased.