The Forgotten History of the Civil War 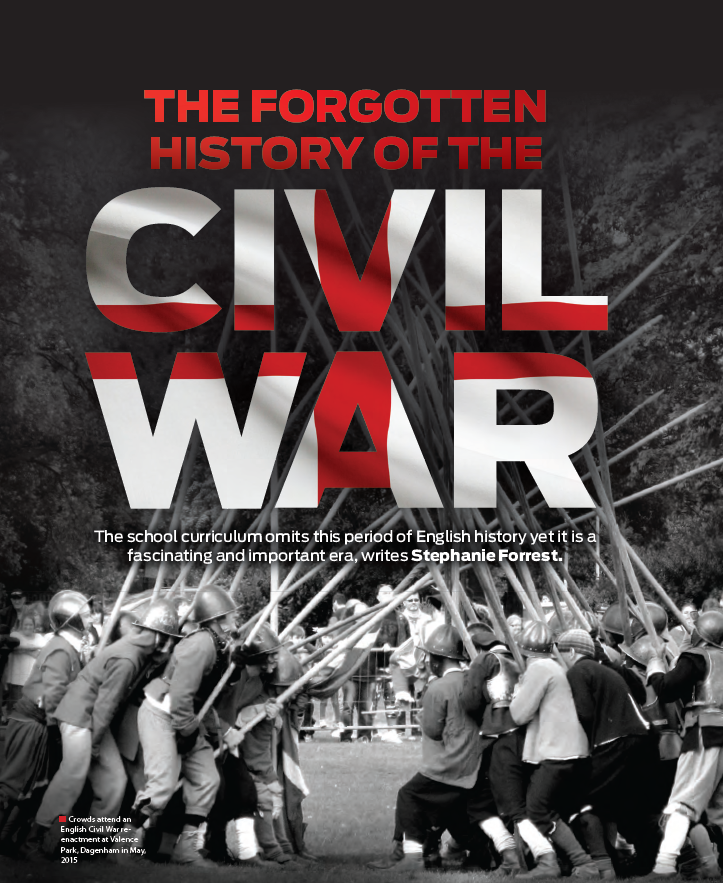 The English Civil War is definitely not as familiar to us in Australia now as it once was. Only a few decades ago, the 17thcentury (along with the Tudors) was a core element of the typical school history course. Likewise, most undergraduate history students would not be versed in the history of the civil wars, the military dictatorship of Oliver Cromwell, the puritans, the Revolution of 1688, and the ongoing confrontations between Parliament and the monarchy throughout the period.

Legally and politically, the events of the 17thcentury were important for broadly setting the respective powers of the monarchy and the Parliament. By the end of the century, Parliament certainly had much more power and independence than it had possessed under the Tudor Kings and Queens. It was also in these years that many modern legal rights and principles and the first English political parties began to emerge.

Yet just as British history in general has been dumped from most history courses, so too has the turbulent 17thcentury.

Australia’s National Curriculum for history skips over it altogether. And while many Australians will have picked up something (possibly inaccurate) about Henry VIII and the Tudors from popular culture— thanks to novelists like Philippa Gregory and television productions like HBO’s The Tudors—England’s 17thcentury apparently lacks the same popular appeal. It has faded into comparative obscurity. In this sense, Peter Ackroyd’s book is timely.

Ackroyd is a popular English novelist and the author of a large collection of fiction and non-fiction books, the vast majority of which are concerned with some aspect of England and English history. Civil War, published at the end of 2014, is the third instalment of  his planned six-volume series that purports to be a full account of the history of England—although it is mainly concerned with the last five hundred years alone. His first volume, Foundation, begins with pre-history and concludes with the death of Henry VII, while the second, Tudors, covers the period from the coronation of Henry VIII to the death of Elizabeth I.

Civil War begins where the second volume ended—immediately after the death of Elizabeth I, when Sir Robert Carey makes a rushed ride of 330 miles from London to Edinburgh, in order to proclaim King James VI of Scotland, King James I of England. It then sweeps through the reign of the merry but paranoid James I, whose relations with the continent, extravagant way of life, and lack of regard for English law and politics soon put him at odds with Parliament.

It then recounts the reign of James’ more reserved and inflexible son, Charles I, whose reign was marred by religious turmoil, popular uprisings against royal favourites, and the worsening relations with Parliament. Ultimately, so the story goes, Charles’ failed campaigns against Scottish leaders—brought on by religious differences—and his conflicts with Parliament, spark a prolonged and confused civil war. As the title of the book suggests, most of the narrative focuses on the years between 1641 and 1651, when civil war raged across England. The ultimate result, of course, is Charles I’s capture, trial, and execution, and the establishment of a short-lived English Republic.

The final sections of this book recount the aftermath of the civil war, as England comes under the control of the military dictatorship of Oliver Cromwell. After prolonged debates, failed experiments with Parliamentary rule, and months of uncertainty, Cromwell is installed as ‘Lord Protector of the Commonwealth’—a post which he maintained for five years and during which he essentially held monarchical powers. On his deathbed in 1658, Cromwell appoints his son, Richard, as his successor, but the latter is soon compelled to resign; the new regime fails to win the lasting support of the ultimately conservative English population. Parliament recalls Charles I’s son and heir, Charles II, from exile on the continent, and restores the monarchy. After several years of a relatively peaceful rule, Charles II is succeeded by his brother James II, whose open Catholicism compelled a group of Parliamentarians to invite William III, Prince of Orange, to invade from the Netherlands and install himself as King. Following this coup—remembered as the ‘Glorious Revolution’—James II flees into exile and spends most of the remainder of his life in France.

As with the earlier instalments of the series, there is little in this book that is original. Civil War doesn’t seem to tell us anything substantially new about the 17thcentury—no new sources, new data, or new angles.

This is, in short, very much a popular history.

The book is also thin on historical argument, and Ackroyd seldom offers his own perspective on events, and he never really attempts to tackle the important questions: namely, why, if at all, the events of the 17thcentury matter? Or what, if anything, they achieved in the long-run? This can particularly be seen in his treatment of the Glorious Revolution, where he refrains even from setting out alternative arguments about the long-term outcomes of this event, and instead only gives a basic account of what actually happened.

Nevertheless, not every history book needs to be academic and as a popular history, this book succeeds. If anyone is searching for a well-written, general introduction to the history of England in the 17thcentury, this book will satisfy your needs.

While the story that Ackroyd has to tell is essentially an old-fashioned narrative of the 17thcentury power struggles, he does well in setting the atmosphere of 17thcentury England.

While every few chapters the narrative breaks away from the political content to include aspects of daily life—such as what it was like to be in the city of London, or court masques, or the development of science— as well as noting the important works of literature that appeared in the period, such as the later works of Shakespeare and the writings of John Milton.

Overall, the bulk of the book is actually concerned with court politics, relations between the King and Parliament, and the personalities involved. Much less attention is given to battles and social or economic developments over the period. Ackroyd nevertheless outlines the political situation relatively well. Readers get a sense that there were multiple reasons for the breakdown of relations between the King and Parliament under James I and Charles I, the most important factors being religious divisions, differences in opinion about the powers of the monarchy and Parliament, and military failures— not to mention the King’s need for tax revenue.

Overall, however, probably the best thing about Civil War is the way that Ackroyd deals with the personalities of the period. He provides interesting character sketches of George Villiers, John Pym, James I, and James II. It is difficult not to pity Charles I when Ackroyd recounts his final days, and particularly his hopeless attempts to escape from imprisonment and his ultimate conviction to die a martyr. Yet probably the most interesting character in his account is Oliver Cromwell—a ruthless military leader, a puritan, and a hypochondriac, who is driven throughout his life by a sense of divine destiny.

While certainly not an academic history, as a popular one Ackroyd’s Civil War makes an enjoyable read and acts as a useful introduction to this important period of English history and the personalities involved. It paints a vivid picture of a time in which there was no distinction between politics and religion, and the King and Parliament repeatedly came to odds.