The Case For No 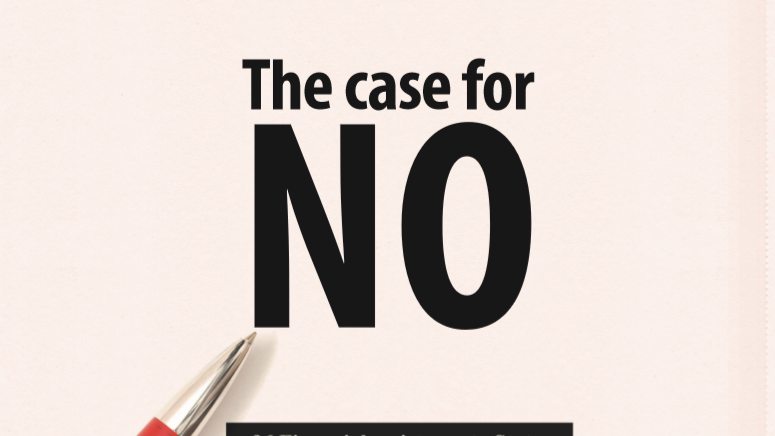 This article from the Winter 2013 edition of the IPA Review is written by IPA’s Director of Policy, Chris Berg and Senior Fellow, Dr Julie Novak.

Make that three times. One of the happy casualties of Kevin Rudd’s decision to go to an election one week before Julia Gillard’s preferred date of September 14 is the referendum to recognise local government in the Australian Constitution. Local government recognition was defeated at a referendum in 1974. It was defeated again in 1988. Now it has been abandoned in 2013.

Let’s hope this is the last time this terrible idea gets up.

Anthony Albanese, the Commonwealth Minister for Local Government, was eager to point out that the change to the constitution proposed was only 17 words.

The referendum to recognise local government would have amended Section 96 to read:

Local governments and their peak lobbies said this was a minor, technical change. Albanese has described it as ‘modest’ and ‘sensible’. Julia Gillard said it simply ‘reflect[ed] modern reality’. Th e Lord Mayor of Sydney, Clover Moore said it ought to be ‘non-contentious’.

The referendum may not be going ahead—thank goodness—but it was a brief window into one of the most deep-seated problems of Australia’s constitution, and a reminder of how the biggest power grabs are dressed up as minor housekeeping.

THE UNCERTAIN PLACE OF LOCAL GOVERNMENT

There is one small way the advocates of a local government referendum are right: councils are strange beasts: they’re half state government departments, half autonomous democratic governments in their own right.

The development of Australian local government by colonial governments was among the many institutional innovations enacted during the nineteenth century.

Town trusts were established throughout Western Australia in 1838 primarily for the management and funding of roads. Th is was followed shortly thereafter by the first elected municipal council in Australia, established in Adelaide in 1840, and similar bodies in Sydney and Melbourne two years later.

By the late nineteenth century local government bodies were widespread and, notwithstanding interstate variations, they were generally responsible for a myriad of functions and activities, such as roads, tramways and other public transport, water supply and sanitation, gas facilities and other local infrastructures.

In some jurisdictions, local governments during the colonial era were responsible for the provision of local schooling, care for orphans and the sick, cultural and recreation services including libraries and public gardens, and even the control of prostitution. Some of these functions have been maintained to this day, whilst others such as direct provision of infrastructure services have been allocated to the states or devolved to the private sector.

While the division of powers in a federated Australia were central to the discussions at the Constitutional Conventions of the 1890s, local governments were largely overlooked due to the understanding that local governments were, and remain to this day, the legal and administrative responsibility of individual states.

There was little by way of direct financial relationships between the commonwealth and the states for most of the twentieth century, although tied roads grant funding to the states had an indirect effect on local road works, and councils had some involvement in the growing post war preoccupation with regional planning by commonwealth and state governments.

The size and scope of local government services significantly expanded during the 1970s, as the Whitlam government initiated a direct commonwealth local funding relationship which provided grants funding, bypassing the states, for programs including senior citizens’ centres, leisure facilities, urban transport and tourism.

The ratcheted federal funding to councils reflected Gough Whitlam’s own perception that ‘there are few aspects of our environment or our development, our culture or our welfare which can be adequately tackled without involving local government.’

And, he ought to have added, ‘without sidelining state governments’. Whitlam’s agenda was highly political: local government financial recognition was a vehicle for the traditional Labor Party hostility to the states. Canberra felt that the federal structure of government was a roadblock to its grand plans for bigger government and social reform. Voters felt otherwise. When Whitlam put the question of local government recognition to a referendum in May 1974, the No case won.

While the Fraser government abstained from some of the more interventionist aspects of Whitlam’s intrusion into local affairs, the general architecture of Whitlam era commonwealth funding arrangements to councils and shires remains to this day.

The other way is through Section 96, which allows the Commonwealth to pass money to local governments through state governments. Section 96 was added to the constitution at the last minute. It has no international precedent in other constitutions. And it has completely undermined the clean divisions of Section 51. Section 96 currently allows the federal government to pay state governments to do whatever the Commonwealth cannot, and allows them to impose tight terms and conditions on that funding. This broad section is how the Commonwealth is now involved in education, health and housing. It is Section 96 that is to blame for the ‘blame game’—the confusion of roles and responsibilities in Australian public policy.

In other words, Section 96 should be scrapped, not expanded. Adding local government to the mix would supercharge this terrible constitutional provision. The Commonwealth would be able to completely bypass the states. Unlike state governments, local governments have no stake in the division of roles in the constitution. They have no powers to protect. They’re also easier to bully: it would be much simpler for Canberra to manipulate and control 565 small councils than six well-funded states jealously protecting their sovereignty.

There is a desperate hunger in Canberra for more control over every area of public policy. During his first term as prime minister, Kevin Rudd even said the Commonwealth should assume responsibility for urban planning—the quintessential local and state government role. Given the steady centralisation of power over the last hundred years, aided in no small part by Section 96, it is virtually a certainty that every local government policy will be eventually decided in Canberra, far from the local communities they effect. But the last thing we want is Commonwealth bureaucrats deciding local rubbish and recycling policies.

The current system has one distinct benefit: state supervision of local government has kept councils from soaking ratepayers.

Since the introduction of the GST, municipal rates revenue in NSW have grown in nominal terms by an average of 4.3 per cent per annum, the lowest growth of all states and the NT and below the national average growth for rate revenue of 6.8 per cent per annum.

The NSW municipal rates regime also generally fares well against other states with regard to other indicators of tax burden. In 2011-12 councils and shires in NSW collected $473 in rates per head of population, the lowest of all jurisdictions except the Northern Territory. NSW rate collections, as a share of gross domestic product, stood at 0.8 per cent in the same year, which was higher than only Western Australia and the NT.

Local governments have long resented constraints imposed upon their abilities to raise additional revenue from municipal rates, with some councils arguing that it prevents them from meeting infrastructure requirements, and other additional service demands placed upon them, resulting from population growth.

Approval of the referendum proposal for financial recognition of local governments in the Australian Constitution would formally provide councils and shires with access to revenues forcibly acquired from federal taxpayers.

The local government referendum is one part of a much broader attempt by the Commonwealth government to free itself from constitutional checks and balances.

One obscure piece of legislation passed by the parliament last year was the Financial Framework Legislation Amendment (No.3) Bill. This bland sounding law was in fact a complete abrogation of the parliament’s duties to scrutinise government spending.

The bill purports to gives the Commonwealth power to spend on more than four hundred separate areas—everything from United Nations contributions to subsidising political party apparatus—without having to ask the parliament for permission ever again.

It’s no exaggeration to say that revolutions have been fought over the question of whether parliament can scrutinise the executive’s spending. But this Australian parliament—with complete, bipartisan support, mind you—has willingly and happily tossed away that responsibility.

The Australian Constitution serves as the enduring ‘rule book’ framing the nature and scope of collective action to be undertaken by the federal government. In doing this it aspires to provide people with a sufficient degree of certainty to go about their daily lives, without undue fear of arbitrary fiscal and regulatory exploitation by politicians and bureaucrats based in Canberra.

The Commonwealth government is also more distant from the locus of political decision making in local and regional areas, and is thus more prone to significant errors as demonstrated by numerous policy failures over the past few years.

It is for these reasons that proposals to shift the constitutional goalposts in favour of greater control and political prestige for Canberra have rightly been resisted in the past.

But the Financial Framework Bill has already allowed the executive to bypass parliamentary scrutiny on its spending.

Local government recognition is no small matter. It would have completely, irreversibly, and destructively rewritten Australia’s constitutional settlement. Will we be asked to revisit it a fourth time? Unless the federal government stops wanting to accumulate power and unbalance the federation, almost definitely.