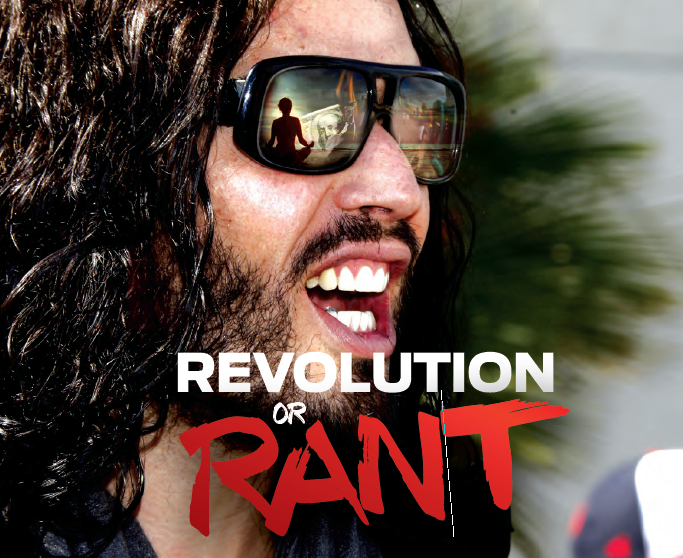 Revolution is Brand’s 350- page rallying cry for the overthrow of civilisation. Brand’s dissatisfaction with the way things are came to light in the now-famous Newsnight interview he had with esteemed British journalist Jeremy Paxman. There, what started as a conversation about Brand never having voted ended with Brand calling for a revolution without being able to explain anything that would come afterwards. So Brand began writing this book.

We have all thought of the perfect line we wished we’d used in an argument long after the moment has passed. Brand has thought of several thousand. Well actually, there are about twenty thoughts in this book, but several thousand lines. Yes: shocking as it seems, this is not the nuanced political treatise of the new society that Brand is calling for.

The first warning sign of that comes on the front cover. Though the book is called Revolution, the image has nothing to do with it. Rather than displaying the problems with our society or the benefits of the future one, it is a photo of Brand, with an expression somewhere between brooding intensity and the standard passport face.

But the front cover does speak for what the book is: an in-depth look at Russell Brand. The book is chiefly filled with anecdotes, Brand’s views on spiritualism, and the occasional complaint about capitalism to tie it all together. The twelve foundational principles of his new society are reserved for six pages towards the end.

Though to be fair, Brand does say in the introduction that this book will detail what the revolution will look like, not necessarily what comes after.

But that is not what the focus of a book about a revolution should be. We all know what revolutions look like—history shows every type imaginable. From blood-stained guillotines in Paris to peaceful rallies in India, there is no new ground to be broken on this issue. More importantly, history also shows us the aftermath. Many books have been written of the scores of revolutionary Frenchmen overthrowing the ancien regime only to later be thrown to the guillotine themselves. Or of Russian boys leaving their farms to overthrow the Romanovs, only to return to even worse starvation.

So what are those twelve principles we should man the barricades for? The first—‘our common welfare should come first’ over individual desires—is as stock-standard leftist ideology as there is. But then later Brand explains that, ‘Each group should be autonomous except in matters affecting other groups or our organisation as a whole’, which sees Brand drifting dangerously close to classical liberalism. Then there are bizarre principles like ‘the only requirement for membership is a desire to stop drinking.’

Listing the principles that govern Brand’s ideology probably will not help convey Brand’s ideology, so after reading the book, Brand’s overall political views can be summed up as follows: Humans are innately good and we are all spiritually connected with one another thanks to a higher order above us. Unfortunately, thanks to the scheming of the wealthy elite—led by the sinister Bilderberg group—we have become disconnected with each other, and are now slaves to consumerism and individualism. Corporations and the wealthy elite are the enemy as they promote wanton wealth inequality and destroy the planet, and they must be overcome peacefully (although Brand at times seems excited for a fight). Once they are gone, we will create the ideal society: a classless system of interlocking yet separate (it is not clear at all) groups that work for each other.

Sincere congratulations if you followed that. You will have also noticed Brand has fallen victim to the same equation as countless political revolutionaries before him: Bad situation + ? = Utopia. But how do we to get from here to the Promised Land? Brand seems to suggest a universal awakening—a moment where the entire world rises as one and says ‘no more’ to modern society.

Any rational economist could explain to Brand that killing GM is going to severely impact the standard of life of GM shareholders, many of whom aren’t the despised rich, and cancelling debt is going to hurt all those who have invested in banks. Any Cambodian can tell you what cutting agriculture off from international markets can do to a community. The problem is that no economist will ever tell Brand, because he has ‘no… intention of asking any.’

Economists certainly are missing. This is a book with no mention of Hayek or Smith, and as many mentions of Keynes as the UK soap The Only Way is Essex (one, and that is one too many for both of them). When you reach the chapter ‘Picketty, Licketty, Rollitty, Flicketty’ (cue raucous laughter), you’ll be so dismayed by the economic ignorance to the point you’ll find yourself sighing in relief that someone serious is getting the time of day. But Picketty is quickly shelved after one page so Brand can summarise his ‘mushroom guzzling space-cowboy’ friend Daniel’s views on ‘the integration of science and mysticism’. It takes a special book to make someone pine for more Picketty.

There has been some concern the ideas in this book will influence the youth to violently pursue Brand’s goals. Don’t worry—we are safe. There is nothing in this book that is actually new. Every idea that is in this book has been thrown out in every Socialist Alliance meeting there has been. And, amidst a crowded field, that is the central disappointment of the book.

There is a lack of imagination in Brand’s manifesto, and no big new idea that outdoes all the other big new ideas before it. Nothing separates Brand’s ideas from the ideas of every revolutionary with an Arts degree. Maybe that will be the sequel: a book that meticulously details life after the Revolution and how the new society would work. That indeed would be revolutionary.