Not In The Same Boat This article from the Spring 2020 edition of the IPA Review is written by IPA Research Fellow, Cian Hussey.

In 2017 former captain Francesco Schettino was sentenced to 16 years in prison for his role in the infamous 2012 shipwreck of the Costa Concordia off the coast of Isola del Giglio, Tuscany. Schettino broke the maritime tradition that the captain should be the last person to leave a sinking ship; that they are responsible for the safety of their passengers and crew, and in an emergency should save everyone aboard or die trying. Schettino saved himself and, of those he abandoned, 32 died.

Schettino refused to ‘go down with the ship’. In response, Italian daily newspaper La Repubblica ran the headline: ‘Concordia, a night of errors and lies’.

For Australians, headlines at the end of 2020 could read: “Coronavirus, a year of errors and lies”.

Much like Schettino, Australia’s political elites have abandoned ship, abrogating their responsibility to instead save themselves. The response to COVID-19 has been a series of errors, and the lies have stacked up over the months. As a result, as Australia looks towards an economic recovery and a path out of the disastrous year that has been 2020, it does so not as a unified whole, but as two separate nations.

Back in March, everyone in the political class, from the Prime Minister down, wanted to encourage a spirit of national solidarity. This gave rise to the first lie of the crisis, which was meant to provide a morale boost. “We’re all in this together,” Prime Minister Scott Morrison said on 10 March, “and we’ve all got a role to play.” In the earliest days of what eventually became the current economic catastrophe, this might have been believable. This phrase—“we’re all in this together”—became the political class’ favourite slogan.

At every opportunity the Prime Minister, Premiers and senior members of government assured Australians that we were all in this together.

Sceptics were confused by this message. Already there was a stark divide between mainstream Australians, embodied in the private sector workers, small business owners, and the self-employed; and the class of politicians and bureaucrats in the public sector. According to the Australian Bureau of Statistics (ABS), at the end of 2019 the average weekly earnings of public servants was 30 per cent above those for private sector workers. Additionally, while private sector workers receive superannuation contributions of 9.5 per cent, those in the public sector receive a minimum of 15.4 per cent—funded by the taxpayer. This divide has been exacerbated by the policy response to coronavirus. Lockdown measures have cost the productive private sector dearly, while the protected public sector has sailed through relatively unscathed.

Institute of Public Affairs analysis released throughout the year has highlighted and explored this divide. Research published in May found the private sector was losing jobs 4.5 times faster than the public sector. Mainstream Australians were well aware they were being left behind and that the captains in the political class were abandoning the ship. While mainstream Australians lost their jobs, and therefore livelihoods and ability to support their families; the political class, who love to virtue signal when it costs them nothing, refused to take a temporary pay cut to share in the sacrifice that was being made for the sake of ‘flattening the curve’.

An IPA poll at the end of April found 74 per cent of Australians thought politicians and senior public servants on salaries over $150,000 should have their pay reduced by 20 per cent. Despite maintaining their assertions that we were all in this together, the political class ignored this overwhelming desire. Prime Minister Scott Morrison said he had “no plans to make any changes to those arrangements” and that he would “just keep doing a good job”. Victorian Premier Daniel Andrews must have been too busy preparing himself for an imminent $46,522 pay rise to pay attention to this poll.

How could Australians all be in this together when the political class were receiving pay rises, while hundreds of thousands of other Australians were put out of work? In reality, as we emerge from the COVID-19 lockdown measures, we do so not as one, but two separate nations comprised of the economic, cultural and political elite embodied in the public sector on one hand, and mainstream Australia embodied in the productive, private sector on the other.

Over the course of the year, commentators have been searching for the ideal letter to express what the economic effect of the coronavirus-inspired lockdowns would be. The most optimistic is a ‘V’-shaped recovery, where, after a short sharp contraction, things return to normal. Another possibility is the ‘W’-shaped recovery, where there is some turbulence provided by a short-lived snapback after the initial contraction and a slower eventual return to normal. The most dreaded, one might think, is the ‘L’-shape, where jobs and economic activity never return to pre-pandemic levels. As shown in an IPA analysis published in August, the public sector has flourished during the lockdown while the private sector has been smashed. As visibly demonstrated in that analysis (shown in the chart on the previous page), mainstream Australians continue to suffer while public sector workers go unscathed. To allow comparison, the number of jobs in both sectors was set at 100 in an Index, on March 14 (the start of the corona crisis). As you can see job numbers (and hence the index) rose in the public sector, but fell in the private sector, creating the “K” shape.

Australians are not all in this together.

Some naively believe this can be explained through the efforts to bolster the healthcare system; naturally in response to a pandemic which threatens to leave people hospitalised, more nurses need to be hired and support staff brought into the fold. But this is not driving the K-shaped recession. The IPA analysis is based on ABS classifications which measure the public sector as the public administration and safety sector. This captures the bureaucrats, staffers working for members of parliament, and other members of the swamp. Healthcare workers are employed in the healthcare and social assistance sector, and in the IPA analysis this is categorised as part of the private sector. This means the true extent of job losses in the private sector is masked by the growth of the (significantly public) healthcare industry throughout the crisis. ABS data shows jobs in the healthcare and social assistance industry grew by 3.3 per cent from 14 March to 22 August.

While the public sector is front and centre of the upwards arm of the K-shaped recession, there are other clear divides in the two Australias. Young Australians, aged 15 to 24, have been disproportionately impacted by lockdowns. Despite making up only 15 per cent of the workforce, they have suffered 35 per cent of the job losses. Small businesses and the self-employed, too, have disproportionately suffered. ABS data shows between 14 March and 22 August, 377,400 Australians who work for small businesses lost their jobs, but only 30,900 who work for large businesses lost theirs. 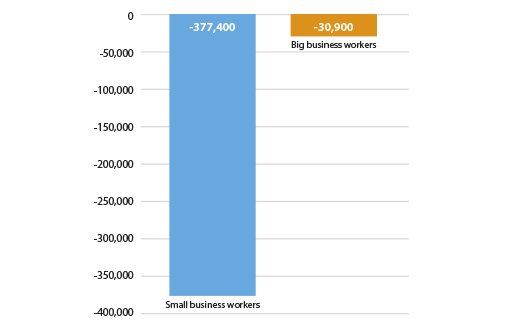 These figures help articulate the fact that Australians are not all in this together, and we never have been. Public sector elites, led by highly-paid bureaucrats and politicians, have been spared the negative economic consequences of the lockdown measures they order.