The arbitrary actions of Big Government during the COVID-19 lockdowns highlighted a wider problem: the ever-growing reach of the modern State.

I advanced the original argument in ‘The Rise and Rise of the Modern State’ (IPA Review, Summer 2021). It’s rampant growth, I suggested, belies the belief—widely accepted on the Left and Right alike—that the ‘neo-liberal’ revolution initiated by Margaret Thatcher in Britain and Ronald Reagan in the United States dealt a crippling blow to the welfare or social-democratic state.

This analysis is a follow-up to my earlier article, exploring what has happened under COVID-19, and who were the Australian winners and losers of the lockdowns and government spend-a-thons.

In brief, the policy responses to the COVID pandemic has put Australia on a pathway to a place it has never been before: a society where well-heeled professionals in public and quasi-public sectors are protected and preened at the expense of the sectors that have historically generated productive wealth. Meanwhile, in the background, looms a crisis of government spending and debt that can only acerbate this primary divide.

Given that one country’s experience really only has meaning when compared to others, I will contrast what happened in Australia with Swedish and British outcomes. Sweden is chosen for having long been seen as the epitome of the big-taxing, big-spending, social-democratic welfare State. Britain, by comparison, has been regarded as an exemplar of a ‘neo-liberal’ society. So as to compare ‘apples with apples’, my figures on government spending, taxation, and debt are drawn from the Organisation for Economic Co-operation and Development (OECD). Currently, reliable figures only go up to 2020. My Australian employment figures for August 2019 (pre-COVID) and August 2021 (lockdown period) comes from the Australian Bureau of Statistics’ Characteristics of Employment, Australia annual survey, which is one of their more reliable datasets they publish. The June 2021 and June 2022 statistics are drawn from the ABS’s job-payroll figures, which are summaries of Australian Tax Office payroll data.

Spending what you don’t have

In Figure 1, Australian taxation levels in 2010 (post-GFC), 2019 (pre-COVID), and 2020 (COVID lockdown) are compared with those for Sweden and Britain. Two things are apparent. First, Australia remains a ‘comparative’ low-tax society, although a nation where taxes represent more than a quarter of GDP is hardly ‘low tax’. The second is that Australia and Britain have closed the gap on Sweden, where taxes consistently represent 42% of GDP. Between 2019 and 2020, however, Australian taxes as a share of GDP rose by only 1% to 28.7%. In other words, increased spending was not matched by a comparable increase in taxes. 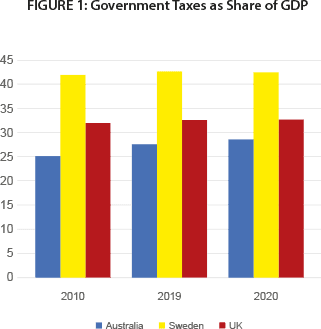 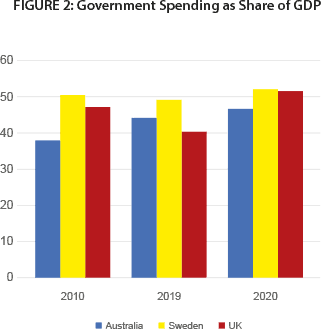 In the case of Britain this gap has effectively disappeared. In 2020, British government spending represented 51.5% of GDP; only 0.5% behind Sweden. Such levels of spending are little different to those Thatcher faced when she was first elected in 1979. To the extent there was any ‘neo-liberal revolution’ under Thatcher, we can conclude, this has now been rolled back. In terms of government spending, Britain has thus become Sweden—and with Australia not too far behind.

It is obvious from Figures 1 and 2 that Australian and British governments are now spending at a rate comparable to that of Sweden, even though their tax rates lag Sweden by a considerable degree. The inevitable result of this is found in soaring debt levels. As Figure 3 indicates, Australian government debt in 2019 (77%) of GDP was 86% higher than in 2010. In 2020, it was more than 20% higher again at 92.6% of GDP. Circumstances in Britain were even worse. By 2020, British government debt amounted to 149% of GDP, a 30.5 percentage increase on the 2019 figure. 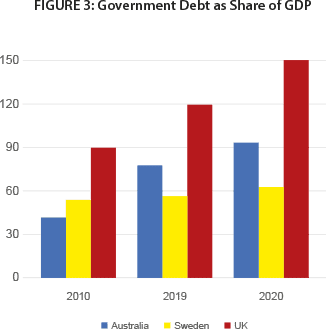 The Australian and British model of spending what you do not have is approaching a crisis similar to Sweden’s experience in the early 1990s when government spending represented an unsustainable 63% of GDP. Sweden responded to this crisis by cutting back spending to around 50% of GDP while maintaining a high-tax regime. Amid an inflationary spiral, Australia and Britain are now also confronting an economic ‘moment of truth’. How will Australian governments respond? In the short-term, one suspects, with continued denial of reality. Amid surging debt and interest levels, however, reality at some point is going to over-ride self-delusion.

The Australian and British model of spending what you do not have is approaching a crisis.

Where, therefore, will spending cuts occur? The most obvious budget items to go are the many ‘green subsidies’—‘renewables’, electric charging stations, tax-breaks on electric cars—that cripple industry and make our looming energy crisis even worse. One suspects, however, these will be the last to go. A whole ‘climate agenda’ has been built around these subsidies. They are now central to the ideology of not only modern Labor, the Teals, and the Greens but also broad swathes of the Liberal Party. Childcare subsidies are also likely to remain sacrosanct as they are central to the ‘Equity Agenda’. Instead, one is likely to see a financially inadequate erosion of what were once considered essential services: ambulances, roads, public hospitals, old-age pensions, etc.

On the tax front, direct increases in personal income tax are unsaleable in a high-inflation environment. Instead, one is likely to see tax increase by stealth in the form of increased business charges, mining royalties (as happened recently in Queensland), car registration fees, and the like. While inadequate to the scale of the problem, such tax increases and spending cuts will largely spare the Left’s modern constituency of professionals and ‘woke’ aligned businesses in the renewable, technology, and financial sectors. Instead, they will hit mainstream Australians and the productive sector of the economy already reeling from the devasting effects of COVID lockdowns.

THE COVID WINNERS AND LOSERS

Historically, the expansion of the welfare or social-democratic State was always justified by claims of serving the general good; that is, the vast bulk of society benefitted at the expense of a wealthy few. Society’s battlers—the old, the poor, the sick—were the supposed beneficiaries-in-chief. Government spending was also justified on the grounds it ‘stimulated’ demand, thereby helping the private sector. In the years preceding the COVID pandemic, such claims increasingly rang hollow, as the professional set were the ones benefitting through jobs in the public or quasi-public sector (such as education and health) and so-called ‘middle-class welfare’ (like childcare subsidies and family payments). In the COVID pandemic, however, Australian governments—like their counterparts elsewhere—engaged in something unique in history: they deliberately crippled the productive economy, even as they spent vast sums that largely benefitted a professional elite.

To read the newspapers in mid-2022 one could easily believe the Australian economy has never been stronger. Unemployment in June 2022 was supposedly 3.5%, even as 792,000 people languished on what used to be known as the dole. Everywhere, we are led to believe, employers have bounced back from COVID. Only labour shortages are holding them back. In fact, industry after industry in the productive sectors of the economy has known nothing but contraction over the last two-and-half years. By contrast, those in sectors dominated by professionals and reliant on government spending have typically enjoyed improved employment circumstances.

Who then are the job winners and losers? In Figure 4, we compare percentage changes in employment between August 2019 (pre-COVID) and August 2021 (late COVID lockdown). The main losers were those employed in blue-collar or service jobs in the productive sectors of the economy. In these sectors, only manufacturing experienced a job boom as people rushed to the shops for toilet paper, hand sanitiser, and other essentials. At the same time, many splurged online, buying home-office equipment, TV cabinets, and the like. Elsewhere, however, the retail, construction, transport, and hospitality sectors went backwards. In retail, job losses in clothing shops and the like outpaced the gains secured by Officeworks and Bunnings. Despite the JobKeeper Payment, 11.1% of hospitality jobs were lost. Behind the job losses in hospitality, retail, and transport were the closure of thousands of small businesses and the shattering of long-held dreams of financial independence.

Among the ‘winners’, education fared badly with employment growing by a feeble 0.8%; a malaise that reflected massive job losses in the university sector as international students were locked out of Australia. As one would expect in a health crisis, jobs in healthcare became more plentiful, expanding by 8.7%. However, public administration and safety fared the best with job numbers growing by 10.5% across the two-year period. In general, with the partial exception of the university sector, those in professional employment who could work from home benefitted. By contrast, except in manufacturing those in blue collar and the service sector were losers.

As the economy came out of lockdown in 2022, one would expect a reversal of the above circumstances. This did not happen. Instead, those employed in the productive sector continued to lose out in the face of continued health regulations, bureaucratic mandates, rising energy costs, and inflationary pressures that were the long-term gift of government pandemic policies. While the retail sector experienced anaemic 0.5% growth, every other major industry in the productive sector went backwards. Manufacturing employment went from growth to contraction. Transport job numbers fell by a further 1.8%. Hospitality contracted by a further 6.8%. 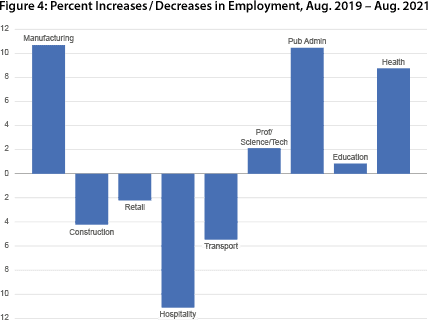 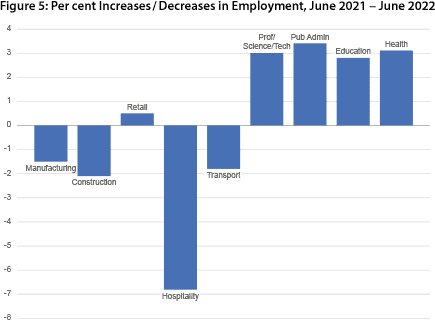 What we witness in Figures 4 and 5 is effectively a class war. This class war, however, little resembles the one Karl Marx fantasised about: a war in which an oppressed proletariat would rise up against their capitalist masters. Instead, governments of all political persuasions curry favour with a professional elite not only largely protected from job losses, but which also finds expanded employment opportunities in the public and quasi-public sectors. At the same time, this group’s pet intellectual projects—climate change, renewable energy, electric cars, inner-city bikeways—are fostered. Meanwhile, those in the productive sector have been treated with disdain. In the government-declared ‘COVID crisis’ of 2020-22, their jobs and interests were dispensable. In the next ‘crisis’—be it one linked to energy, climate, or some other fashionable cause—those employed in the productive sector can expect similar treatment again. A powerful precedent has been set which will undoubtedly be grasped with enthusiasm by the same people who supported the COVID lockdowns: the ‘progressive’ left, the ABC, and the ruling factions of Liberal and Labor State governments alike.

Bradley Bowden is an Adjunct Fellow at the Institute of Public Affairs and a Professor in Griffith University’s Griffith Business School.

This article from the Spring 2022 edition of the IPA Review is written by historian and IPA Adjunct Fellow Bradley Bowden.