In 2021 he was appointed the Academic Coordinator at the Robert Menzies Institute.

Zachary's research interest is on the origins of the classical liberal tradition both within Australia and in a wider Western context. He has been published in Quadrant, History Australia, the Journal of Australian Colonial History and the Journal of Imperial and Commonwealth History. He wrote a chapter on George Reid in Gregory Melleuish's Liberalism and Conservatism and has also appeared on ABC Radio National.

Zachary is the author of Sir Joseph Carruthers: Founder of the New South Wales Liberal Party, published by Connor Court in 2018. The book is a biographical exploration of classical liberalism's impact on the Australian party system and how the term 'liberal' came to be associated with the right in Australian politics.

As a resident Research Fellow with the IPA's Foundations of Western Civilisation program (2018-2020) he explored the antecedents and impact of Magna Carta, trying to contextualise the famous document within a wider tradition of attempts to limit the power of potentially despotic governments.

The result is Summoning Magna Carta: Freedom's Symbol Over a Millennium, published in 2021 by the IPA in conjunction with Australian Scholarly Publishing, available here.

This article from the Summer 2020 edition of the IPA Review is written by IPA Adjunct Fellow, Zachary Gorman. The unique circumstances of the pandemic have seen age-old questions about…

This article was coauthored by Mark Hornshaw, lecturer in Economics, Entrepreneurship and Management at The University of Notre Dame Australia. It originally ran on the website for the Foundation...

Why We Erect Statues – And Should Keep Them There

Amid a world that seems hell-bent on tearing down statues in a cathartic frenzy, it is worth sparing a moment to reflect on why we erected those statues in the…

As Scott Morrison eyes consensus-based industrial relations reform, he must not commit the ultimate sin for any Liberal leader and forget Sir Robert Menzies’ forgotten people. As part of... Dear IPA Members As a historian you tend to be highly conscious of the truism that we are always living through history. As time passes, moments crystallise into the building…

How The Coronavirus Response Shows We Have Lost Our Fundamental Values

Australia’s response to the coronavirus threat reveals that we have lost our fundamental values. While our nation is faced with what is arguably the most significant peacetime threat since...

This article from the Summer 2019 edition of the IPA Review is by the IPA’s Foundations of Western Civilisation Program Researcg Fellow, Zachary Gorman. Of all the crises facing...

This article from the Summer 2019 edition of the IPA Review is by Director of Research Daniel Wild and IPA Research Fellows Zachary Gorman and Andrew Bushnell. It is an… 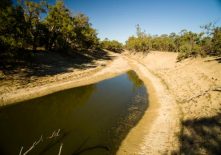 The failure of the Murray Darling Basin Plan is an example of what happens when decisions are taken out of the hands of locals and given to distant Canberra bureaucrats….

The preparation of Australian values and the enduring importance of the nation-state is motivated by the Senate Legal and Constitutional Affairs References Committee’s Inquiry into nationhood...

Ban On Mayoral Medals Reveals A Chain Of Fools

Clover Moore’s decision to stop wearing the City of Sydney’s historic mayoral chains is based on ignorance. Not just the ignorance of wearing a symbolic outfit for fifteen years before…

Fathers of Our Constitutional Inheritance

Australia’s successful constitution is a combination of a written document and an unwritten parliamentary system based on custom and precedent imported from Britain. This series documents how that...