David Kemp chronicles how an ascendant utopian socialism dragged Australia down, until believers in freedom regrouped and fought back, writes IPA Senior Fellow Richard Allsop. It is rare to...

Historian Keith Hancock’s classic work from 1930, “Australia”, provides solid grounds from which to assess our nation’s past and present economic and social problems, writes Richard...

To Be Released: Penguin The Censorship Killers

This article from the October 2019 IPA Review is by IPA Senior Fellow, Richard Allsop. At a March 1901 banquet in London celebrating the Federation of the Australian colonies, British…

Historian Alex Ryrie expounds Martin Luther’s profound influence on the modern world but also explains Protestantism can’t take all the credit for the rise of tolerance and freedom, writes...

A new Richard Nixon biography uncovers more murky behaviour by the controversial president, writes Richard Allsop. Richard Nixon has already been the subject of plenty of biographies, but his...

A new book by John Edwards explores the political life and relationships of Australia’s 14th Prime Minister, John Curtin  (John Curtin’s War, Volume 1: The Coming of War in the Pacific... When Alfred Deakin quit politics in early January 1913, the initial press assessments of his contribution to public life were not particularly effusive. This even applied to The Age, the... 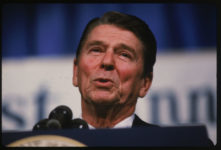 ‘We have just witnessed the political funeral of Ronald Reagan’ opined Tom Pettit of NBC on a night in January 1980 when Reagan lost the Iowa caucuses to George Bush…. Despite doubts about his age, intellect, and political philosophy, Ronald Reagan’s message of hope won him the presidency, writes Richard Allsop. ‘We have just witnessed the political funeral of...