As Unis Stifle Free Speech, We Need A Law To Stop The Rot

The federal government needs to introduce US-style campus free-speech legislation to safeguard free intellectual inquiry and open debate at Australia’s universities. We are in the midst of a... 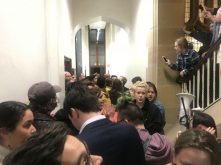 Is Safetyism Destroying a Generation?

Tim Soutphommasane and the Exacerbation of Race Politics

In his final speech as Race Discrimination Commissioner, Tim Soutphommasane declared that “race politics is back” and asserted that the “biggest threats to racial harmony …...

Nobody Wins in Global Trade War

Australia has much to lose in the looming global trade war, writes Matthew Lesh. Protectionist rhetoric by United States President Donald Trump threatens a new global trade war on a…

When Two Tribes Go To War

Tribalism is splitting the United States down cultural and political lines, and Matthew Lesh fears Australia is heading in the same direction. As the infamous author of Battle Hymn of…

When politicians are tempted by a big vision, fiscal prudence is rarely front of mind. Once there are nine or more digits after the dollar sign, the numbers are so…

The Kids Aren’t All Left

Last week Elin Ersson, a 21-year-old Swedish student, halted the deportation of an Afghan asylum seeker from Sweden by refusing to sit down on a plane. Not shy of the…

Universities Of The Closed Mind

A series of leaked emails reveal the depths of prejudice and groupthink at Australia’s universities. In late May, Macquarie University academics were invited to a presentation by an Israeli...

University Regulator TEQSA Has Lost Its Way On Political Matters

Australia’s university regulator, the Tertiary Education Quality and Standards Agency, is not only failing to protect free intellectual inquiry but its ideologically driven interventions are part...