Evan Mulholland is Director of Communications at the Institute of Public Affairs.

Prior to joining the IPA, Evan has worked for state and federal parliamentarians, most recently was an adviser to Communications Minister Mitch Fifield.

Evan’s opinion pieces and comments have appeared in The Australian, Sydney Morning Herald, The Age, The Herald Sun, The Weekly Times, Crikey, The Spectator, The Courier Mail and the Hobart Mercury. He has also appeared as a commentator on Sky News Australia, Network Ten, ABC News Radio and 3AW.

Evan attended Marcellin College, Bulleen before studying a Bachelor of Arts in Politics and Drama & Theatre at La Trobe University, where he went on to become President of the Australian Liberal Students Federation.

Evan takes a keen interest in all things theatre, he was President of ARC Theatre Company for several years and currently serves on its board. He is also an avid St Kilda member and cricket fan.

“Australia is the greatest nation on earth, but our freedoms and way of life must be protected if our prosperity is to endure,” said Daniel Wild, Director of Research with…

Free market think tank the Institute of Public Affairs has condemned the Australian Council of Trade Unions (ACTU) for engaging in a blatant political stunt. The ACTU’s protests are not…

Journalist, parliamentarian, editor, author and Spectator Australia columnist Peter Coleman has died in Sydney at the age of 90. He was perhaps the last of his kind, a public...

The decision by the Federal Government Minister for Immigration to deny provocateur Milo Yiannopoulos a visa to enter Australia is outrageous. This marks the third position the government has... 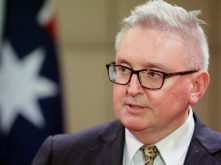 Don Harwin is to be credited for his role as the state’s Minister for Energy and Utilities. But his recent suggestions for the future of energy and climate policy in… On Monday ‘The Australian’ reported on its front page the IPA’s Free Speech on Campus 2018, which finds that free expression is slipping even further. The audit analyses over 190...

It is disappointing that Malcolm Turnbull appears to be taking part in the same headline-grabbing antics for which he has criticised others. When his efforts to get clean air and…

When politicians are tempted by a big vision, fiscal prudence is rarely front of mind. Once there are nine or more digits after the dollar sign, the numbers are so…

Yesterday Fairfax Media and Nine Entertainment announced that they will merge, forming a media organisation worth $4.2 billion. The new organisation will be known as Nine. This merger has...

“Offenders in community service in South Australia are not doing all the hours of work that they should be doing to pay back their debts to society,” said Andrew Bushnell,…